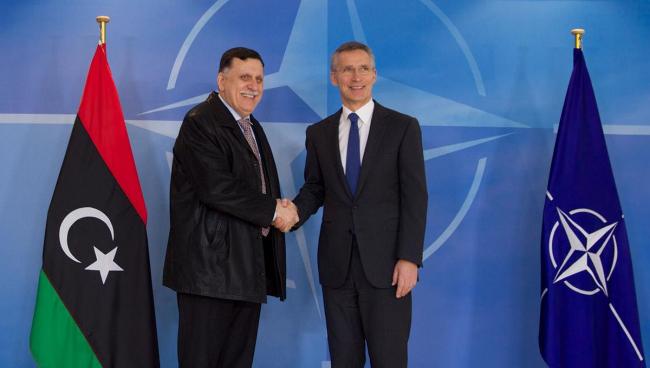 NATO extends support to Libya in its fight against ISIL

The Secretary General said he was encouraged by the progress being made in the fight against ISIL in Libya and conveyed NATO’s support to the Government of National Accord.

During their meeting, the two leaders also discussed how to take cooperation forward.

“NATO stands ready to assist Libya in building effective security and defence institutions, strengthening your ability to fight terrorism and create conditions for peace,” said Stoltenberg after the meeting.

He added that, in the future, NATO could offer advice on establishing a modern Ministry of Defence, a joint military staff, and security and intelligence services under civilian control. If requested, the Alliance could also support the efforts of the European Union to strengthen the Libyan Coast Guard and Navy.

Speaking at a joint press conference with Prime Minister al-Sarraj, the Secretary General also addressed the situation in eastern Ukraine.

He expressed deep concern over the recent spike in ceasefire violations and violence around Avdiivka. Calling for “an immediate return to the ceasefire,” the Secretary General stressed that OSCE monitors must be guaranteed free and safe access to the region. He further called on Russia to use its considerable influence over the separatists to bring the violence to an end.