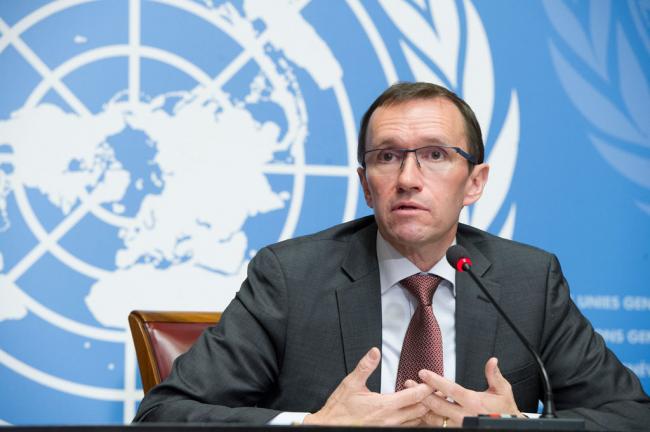 India Blooms News Service | | 14 Jan 2017, 08:28 am
#International conference, # Cyprus negotiations, # UN, # Geneva
New York, Jan 14 (Just Earth News): Speaking in Geneva a day after the start of a United Nations-supported Conference on Cyprus, a UN advisor said the open and frank exchanges at the meetingâ€™s opening confirmed two things: â€œfirst that there are difficult issues to overcome; and second that there is a will to overcome them.â€

“The last days have been a watershed moment for the Cyprus negotiations,” Espen Barth Eide, the UN Special Adviser Cyprus, told reporters on Friday.

Recalling the statements made at the Conference’s opening, Eide said they conveyed a strong message of hope that the long-standing dispute “can now finally be laid to rest and a united federal Cyprus can emerge and can be embraced in a security arrangement that is mutually acceptable for all sides.”

He further informed the journalists that the next event in this Conference is a meeting which will take place next Wednesday (18 January), and will see senior civil servants come together to start working on specific ideas, options, proposals to prepare the ground for a structured final discussion between the principals at the very high political level, which will take place later.

Noting that the meeting will not be negotiations, Eide added that while a date is not set for the principles to come together, “it is going to be soon.”

He went on to say that while “not everything is new under the sun,” the fact that the guarantors – Greece, Turkey and the United Kingdom – are in the meeting with the Cypriots, and “the fact that we now are setting up this structured conversation about security itself, is new, it has not happened in this forum. All this, Eide stressed was thanks to the leadership of Greek Cypriot leader Nicos Anastasiades and Turkish Cypriot leader Mustafa Akinci.

Thanking all participants at the conference for their support, he called on everyone to reflect and prepare themselves for the upcoming meeting.

“The idea now is that rather than just rehearsing the old scripts and reading from notes that have been around for decades, we will now try to decompose these different elements together, not to negotiate them but to try to look into the different components,” and find ways to address the concerns of all Cypriots, he explained.

“I think that there is a momentum now. Larger political developments remind us that it is probably, or quite surely, very important to use these days as effectively as we can and in as constructive spirit as possible,” concluded Eide.

At the end of yesterday’s discussions, which were opened and chaired by Secretary-General António Guterres, the UN announced that the participants in the Conference had decided to take the following steps:

Establish a working group at the level of deputies. This group will commence its work on 18 January. Its task will be to identify specific questions and the instruments needed to address them;
In parallel, the negotiations on outstanding issues in the other chapters will continue between the two sides in Cyprus; and that
The Conference will continue at political level immediately thereafter to review the outcome of the working group’s discussions.