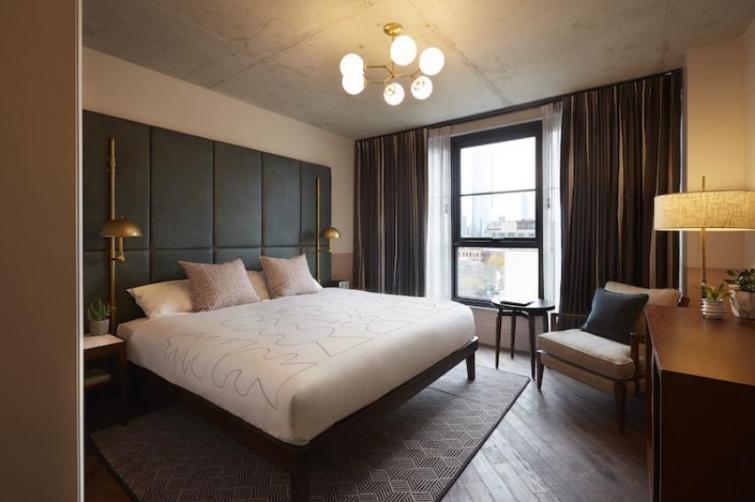 WHEN I checked in this April in Chicago's newest property for growing tourists, The Hoxton, it was about midnight. But unlike any five star hotel with an orderly lobby of relaxed or stressed out travellers walking in or out toting their suitcases, I encountered the ambiance of a city's popular night joint- it was teeming with young to middle aged good looking souls in a party mood.

The Hoxton, a British brand, after all is promoted as a series of "open house" hotels inspired by the streets and scenes that surround them.

The double-height lobby of The Hoxton is a meeting place of energetic fun-loving souls. They describe it as a lobby with an "eclectic assortment of comfortable seating where people catch up over coffee, work among friends or enjoy food and drink from morning ‘til night."  It is literally so. The moment you enter The Hoxton, you feel young, energetic and raring to go rubbed by the energy and vibes of the happening lobby crowd.

The young man at the reception with a bright smile handed over the key and said something, which I could hardly hear because of the din of the place. Welcome to the 24x7 revelry of The Hoxton!!! 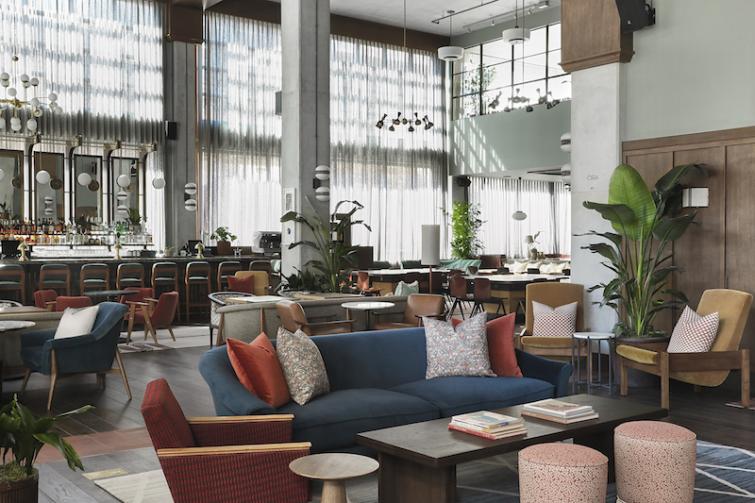 Then as you enter your room- which is not too spacious but very well crafted- you understand that the decor of the hotel is heavily inspired by the area's industrial past. The unfinished concrete ceilings and warehouse-style windows complemented by two-toned walls of white and rose, every aspect adding to the theme of the neighbourhood's chromosomes.

The Hoxton, Chicago opened  in the heart of Fulton Market District, being the seventh hotel in the series and the third property in North America.

Situated on the site of a former meatpacker in the Fulton Market District it is at 200 North Green Street. It is touted as one of Chicago’s most creative, food-obsessed and artistic neighbourhoods.

The Rooms and Lobby:

The Hoxton, Chicago boasts of 182 rooms designed by Ennismore Design Studio and come in three categories: Snug, Roomy and Cosy. Every bedroom comes with the typical Hox perks: complimentary water and WiFi, one hour of free calls to anywhere in the world, a mini fridge, local products at supermarket prices from the reception shop, and a daily breakfast bag delivered to the room. The Hoxton offers a complimentary light breakfast unlike most hotels with an elaborate breakfast offering. But this small breakfast arrives in a neat paper bag which is hung by the staff on a hook outside every door.

The Hoxton has three distinct dining and drinking destinations, lively public spaces and The Apartment, a unique meeting and events space on the mezzanine floor overlooking the lobby. Vinyl records and the mint-green retro  Smeg fridge- stocked with complimentary refreshments and a retro snacks candy bar- adds to the overall theme of the hotel. The hotel pitches The Apartment as an "ideal place for everything from intimate meetings, to one-on-ones, photoshoots, brand launches, private dinners, and larger celebrations."

Magnificent views from The Hoxton. On a tour of the space yesterday, I was astounded at the Chicagoan essence the Hoxton team intertwined into the hotel. My jaw definitely dropped when we arrived at the top.


The Hoxton, Chicago also features several brand “firsts” including The Hoxton’s first rooftop pool, a wellness studio with mind and body-focused programming, a ground-level retail unit housing new and noteworthy brands that will evolve seasonally, and the first location of The Hoxton’s new coworking concept.

Set over two floors, the brand’s much-loved “lobby culture” will be morphed into dedicated work space, with desks, studios and meeting spaces available for freelancers, small businesses and travelers, welcoming members with plenty of perks when it opens this summer.

Ennismore- the London-based owner and developer of The Hoxton- has partnered with Boka Restaurant Group (Girl & the Goat, Boka, Momotaro, Bellemore) for the hotel’s bars and restaurant venues. The Hoxton, Chicago’s rooftop boasts of Cabra Cevicheria, an open-air Peruvian-inspired restaurant helmed by renowned chef, Stephanie Izard. 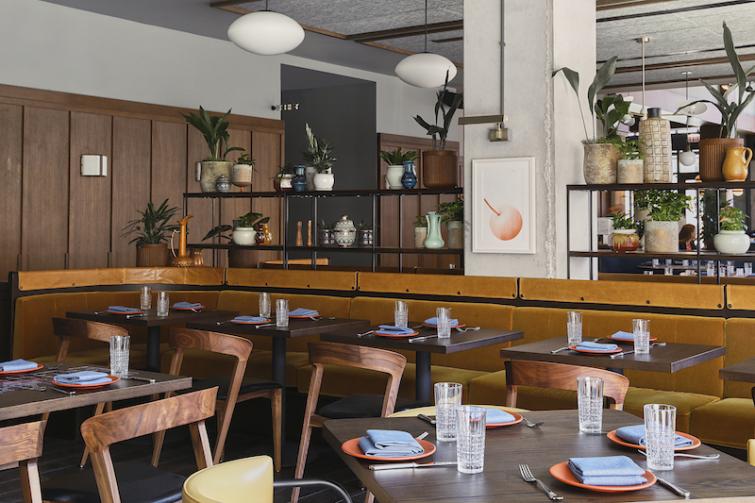 On the ground floor, Cira is an all-day modern Mediterranean restaurant by Chef Chris Pandel serving breakfast, lunch, dinner seven days a week, as well as weekend brunch. The menu is made up of small, shareable plates inspired by the countries that make up the Mediterranean Basin and their symbiosis over the years. 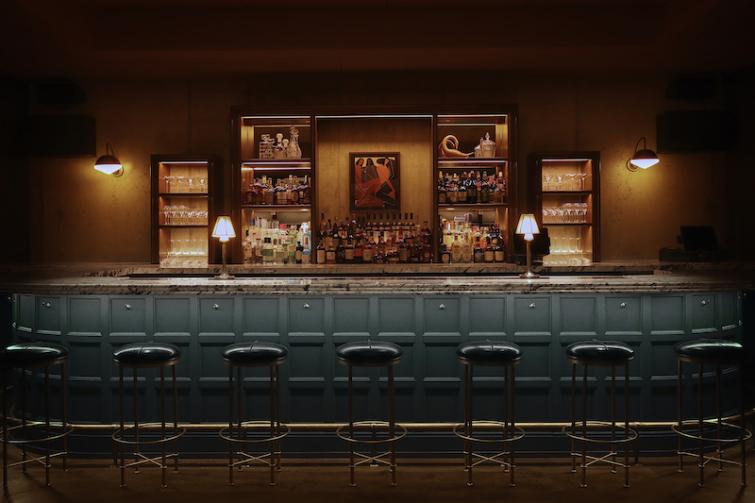 Cocktail enthusiasts should head downstairs to Lazy Bird, an intimate cocktail bar with an exciting menu of 52 classic cocktails. The bar will be a great late-night spot, with live jazz, rock and soul on select evenings. All three restaurants were designed by AvroKO in collaboration with Ennismore Design Studio, taking inspiration from muses such as varied as Edgar Miller, post-prohibition Chicago and vintage furniture finds.

Ennismore Design Studio has collaborated with award-winning design studio AvroKO to design communal areas, which embrace The Hoxton’s much-loved open-house policy. The double-height lobby is thus full of seating arrangements where you can catch up all day over coffee.

An innovative and imaginative art collection was curated across the hotel by Ennismore Design Studio in collaboration with Johalla Projects that showcases the creative breadth  of Chicago’s art community. Guests will encounter over 250 artworks in rooms and over 100 artworks in common areas, ranging from prints by Sonnezimmer and Dont Fret, to a dramatic tapestry by honorary citizen of Chicago, Alexander Calder, in the lobby. 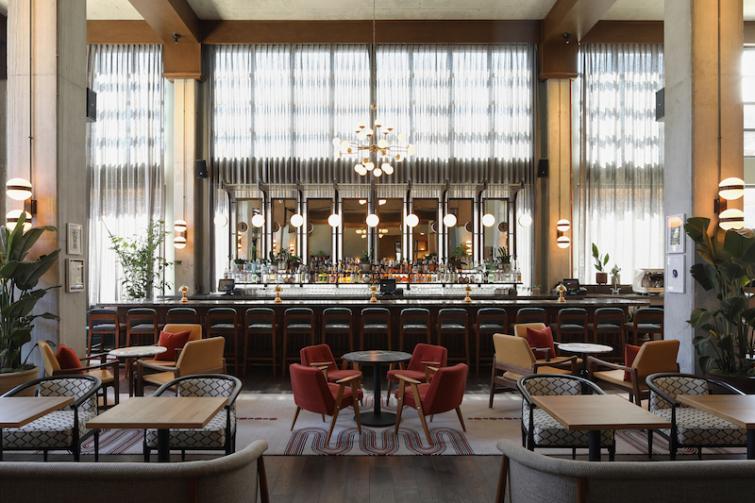 Continuing the hotel’s dedication to the city, the Best of Chicago retail collection is a range of exclusive products created in collaboration with local artisans, makers and brands, available to purchase in the hotel’s lobby.

The Hoxton hotels: The Hoxton from London-based Ennismore- first opened  in Shoreditch, East London, way back in 2006. The Hoxton, Holborn opened in 2014, followed by The Hoxton, Amsterdam in 2015, and The Hoxton, Paris in summer 2017. The Hoxton, Williamsburg was the first U.S. opening, followed by Portland and Chicago, with Downtown LA and Southwark (London) all in the pipeline. www.thehoxton.com