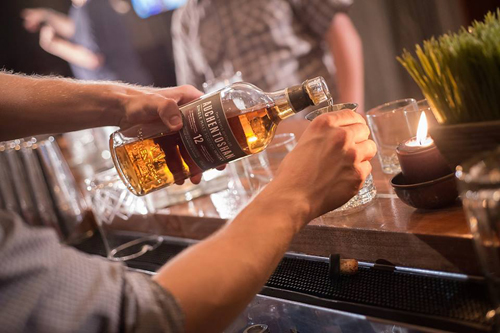 According to a mock-news video, released internationally by Scotland’s National Tourist Board on April first, a number of cows close to the Auchentoshan Distillery in the Highlands have begun producing whisky flavoured milk as a result of sustainable practices.     The Scottish whisky industry has a reputation for using barley and other by-products from the distilling process as feed and fertiliser for the crops and livestock of nearby farms and according to this spoof the result is incredibly tasty. So tasty in fact, it is being released onto the market – just in time for Whisky Month!     The mock-news video can be accessed through this link - http://youtu.be/hGGf-u1VU7c    Established in 1823, Auchentoshan (Ock-un-tosh-un) Distillery is on the mainland of Scotland, situated on the A82 between Glasgow and Loch Lomond. This Lowlands Malt Distillery rests at the foot of the Kilpatrick Hills, overlooking the famous River Clyde, once renowned as the Scottish gateway to the world.