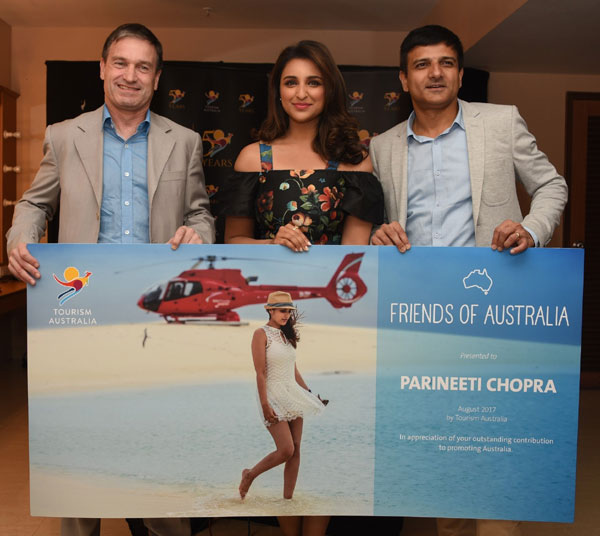 The Friend of Australia recognition was presented to Parineeti by Australian Consul General,  Tony Huber, for her contribution to promote Australia. This appointment will help to further cement the close ties between both the countries – Australia and India.

The Friends of Australia program has been devised as a way for Tourism Australia to foster mutually beneficial and long-term ‘friendships’ with those they regard as unique, positive and influential story-tellers.

Parineeti is all set to visit Queensland and Northern Territory, exploring Australia’s aquatic and coastal experiences, rugged outback, unique wildlife and its incredible variety of world-class food and wine offering. Being a lover of nature and adventure, Parineeti’s trip to Brisbane, Gold Coast and Ayers Rock will see her venturing into exotic and adventurous activities such as whale watching cruise, meet the dolphins, surfing, Sky point adventure climb, helicopter flight over the Ayers Rock (Uluru), Harley Davidson ride, aboriginal experiences, and witness the spectacular ‘Field of Light’ installation in the Red Centre of Australia, among many others.

Commenting on her appointment as ‘Friend of Australia’, Parineeti Chopra said, “I am extremely delighted today to be appointed as a Friend of Australia, since Australia is one of my favourite holiday destination. I had visited the country last year and I feel there is so much more to explore that one trip is not enough. The country has much more to offer and I’m fascinated by its warm and welcoming people, spectacular nature, unique wildlife, world-class food and wine options and smorgasbord of adventure activities. I’m all excited for my next trip to Australia, visiting Brisbane, Gold Coast and Ayers Rock, and would recommend everyone to experience the country once in their lifetime as there’s truly nothing like Australia.”

Developed in 2010, Tourism Australia’s Friends of Australia program is a platform for Australian and international personalities to become advocates for Australia by sharing their experiences of our country through their own networks and Tourism Australia’s channels. Their stories then help inspire others to come and visit Australia. The program has more than 130 friends spread across the world, including Chris Hemsworth, Sir Richard Branson, Baz Luhrmann, Brett Lee, Adam Gilchrist, Glenn McGrath, Matt Moran, Michael Clarke, Steve Smith, amongst others.