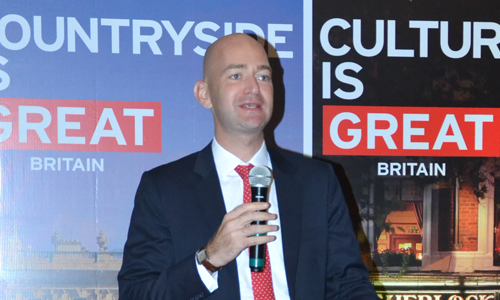 VisitBritain holds roadshow in the east

India Blooms News Service | | 09 Jul 2014, 05:05 pm
#VisitBritain
Kolkata, July 9 (IBNS) VisitBritain, the flagship tourism division of Great Britain held a first of a kind road show in Kolkata on Monday as part of its all- India campaign to promote tourism in Britain.

Aimed at reaching out and augmenting the considerable number of Indian travellers to the country, the event attracted  participation of more than 15 suppliers like VisitManchester, Tourism Ireland, Globus & Cosmos, etc. who cater to tourism needs and organise packages.

Speaking on the occasion, Scott Furssedonn-Wood, British deputy high commissioner, Kolkata, said that in 2013, 375,000 from India visited  Britain - a new record, and they spent £441 million in Britain last year, 32 per cent more than in 2012.

He emphasised the Bengal-Britain link with common interests in sports like cricket and football, food, and the cultural trail of literature and theatre. Britain offers different sectors to explore according to one’s interest.

The VisitBritian organisers urged visitors to ‘look beyond London’ and explore the potential of newer areas for holidays in Britain.