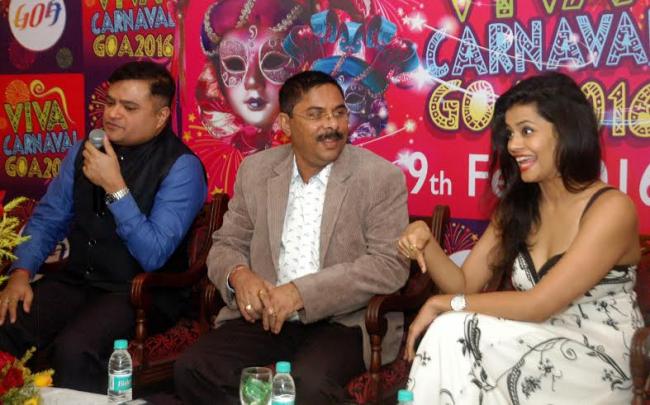 Goa to host wine festival and Carnaval 2016 in February

India Blooms News Service | | 21 Jan 2016, 06:24 pm
#Goa, # Goa Carnival, # Goa tourism
Kolkata, Jan 21 (IBNS): Goa Tourism, on Thursday, held a press meet in Kolkata to update everyone about the Grape Escapade and the Carnaval, two of its famous festivals, to be held in early February.

All the big names in the wine industry converge at the globally well-known Grape Escapade to discuss, taste wines and  engage with other business stakeholders in the tourism and the hospitality sector.

The two festivals have been dovetailed to allow visitors to enjoy the best of both, said Nikhil Desai, Managing Director, Goa Tourism Development Corporation.

The Goa Carnaval is a legacy from the times Goa was a Portuguese colony.

Goa's tourism minister, Dilip  Parulekar, said, “The Goa Carnaval is a colourful and vibrant spectacle which gives one a glimpse into Goa’s glorious past and is a shining example of how traditions have been carried over time.” He also added, “Since this is a one-of-a-kind event, we have people from all over the globe coming in. While the spirit of this celebration is contagious, we have taken into account aspects like safety, security and cleanliness, which will ensure that the celebration is a truly memorable one.”

Palomi Ghosh, one of the lead actors of the Konkani film, Nachom-ia Kumpasar (Let's dance to the rhythm), was also present at the meet.

Ghosh will be accompanying King Momo, the legendary character who declare the Carnaval open, in his float, which leads the procession of floats.

The word Carnval is derived from the Latin expression 'carne vale', which means 'farewell to meet'. The festival is observed just before Lent of the Christian calendar.

The 2016 Carnaval is going to be a special one. Titled Destination Carnaval, it is part of a  project  in association with  a Liverpool, UK-based arts organisation, Brouhaha International, and is aimed at exchange of ideas and talents across three countries, namely UK, South Africa and India (Goa).

According to Desai, Goa is very keen to promote itself as an adventure tourism destination.

While  full-fledged  operations of hot air  balloons have  begun,  that of  seaplanes and  amphibious vessels (Duck  Boats) are likely to start in Feb 2016.  Helicopter rides, motorized  paragliding, Segway tours,  bungee  jumping, scuba diving  and  horse riding  trails  are  also  set  to  begin with a few  weeks.

On Jan 26, Goa Tourism will launch its heli-tourism project.

Minister Parulekar emphasized on the safety aspect, especially for women, and said Goa has introduced a women taxi service for more than a year now; only women and families are allowed to travel in these taxis.

Security on the beaches have been strengthened with  a beach patrol of 676  trained life guards posted at the popular beaches;  an additional 117--people  strong patrols the beaches until  midnight; the  tourist police keeps a watch on  touting.

Talking to IBNS, Desai said, Goa Tourism is using the social media to spread awareness about pollution. While visitors are reminded to keep the beaches clean, there is also a stringent beach cleaning policy in place. There is a waste treatment facility in north Goa.