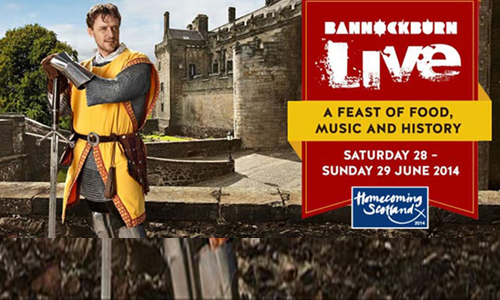 India Blooms News Service | | 30 May 2014, 05:05 pm
#Scottish Festival
Edinburgh, May 30 (Not in Town/IBNS) Bannockburn Live, a Homecoming Scotland 2014 signature event, will immerse you in Scotlandâ€™s history and culture, commemorating the 700th anniversary of the Battle of Bannockburn and celebrating the very best of Scottish folk music, food and drink.

A visitor can take his place on the battlefield and watch history unfold!

The spectacular Bannockburn battle performances have been choreographed by Clanranald, famous for their work on Hollywood blockbusters such as Gladiator, Robin Hood and Thor II.

Each day there are three opportunities to watch the re-enactors do battle, ensuring plenty of time for all to enjoy the action, as well as the other cultural entertainment at this one off festival.

Capturing every essence of Scottish culture, the atmospheric Bannockburn Battlefield will transform into five distinct areas:

• Medieval Encampment - Step back in time to June 1314 and explore the bustling interactive encampments and experience the sights, sounds and atmosphere of 14th century Scotland.

• A Scottish music stage - Award-winning folk and contemporary artists performing throughout the event. Featuring Julie Fowlis – the voice of Disney Pixar’s Brave – Dougie MacLean, Karine Polwart and over 300 others.

• Clan and Family Village - Around 40 clans from across the UK and overseas will converge at Bannockburn, along with expert genealogists from the University of Strathclyde, providing an opportunity to trace your Scottish roots.

• Food & Drink Village - Curated by Scotland Food and Drink, visitors to Bannockburn Live can sample and savour delicious Scottish products, whiskies, real ales and more as well as meet the passionate producers behind them.

• Storyville - ‘A festival within a festival’, theatre, storytelling, debate, stand up comedy, dreaming and wonder.


There will also be a comprehensive children’s programme, including hands-on bush craft, wildlife and outdoor activities as well as opportunities to participate in sports like archery and medieval Highland games.

One can get the tickets at : http://www.ticketsoup.com/tickets/bannockburn-live-2014-15166/default.aspx