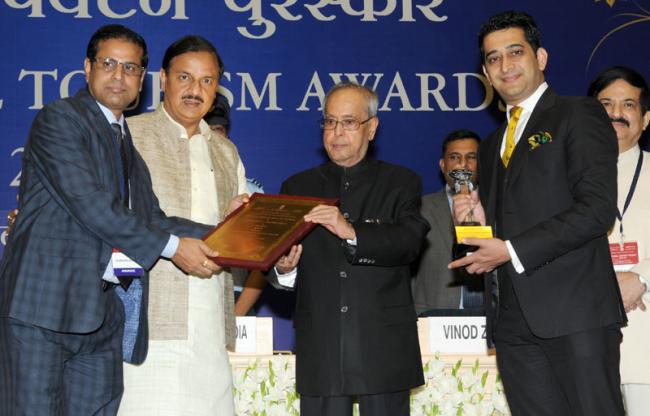 Speaking on the occasion, the President congratulated the award winners and said that these exceptional individuals and institutions who have been felicitated today have distinguished themselves through their dedication in promoting India as a tourist destination.

He expressed the hope that the honours conferred today would reinforce the commitment of all the stakeholders in the tourism sector and motivate them to work with renewed vigour for its expansion and growth.

The President said that with the growth of the Indian economy and the increase in disposable income of the people, we may expect tourist inflows to remain on a positive trajectory in the years to come. We must pay focussed attention to the building of a high quality tourism infrastructure in the country.

The launch of two initiatives - Swadesh Darshan and PRASAD (Pilgrimage Rejuvenation and Spiritual Augmentation Drive) - aiming at integrated development of circuits and pilgrim centres would go a long way in achieving this objective. He emphasized that the safety mechanisms that we create, the precautions that we put in place must reassure our guests - so that they never have to be apprehensive about their personal safety or that of their belongings.

The President urged the tourism industry to consciously plan its investments in a manner that the growth of this sector is sustained without compromising our natural and cultural heritage. He said that broader social contacts between tourists and receiving communities go a long way in enhancing mutual understanding, tolerance, and awareness between peoples.

Tourism translates into closer collaboration and cultural exchanges across the nation and with distant communities all over the world. India offers one of the best tourism experiences in the world. The President stated that he had no doubt that collectively we can earn India its rightful place in the tourism map of the world.