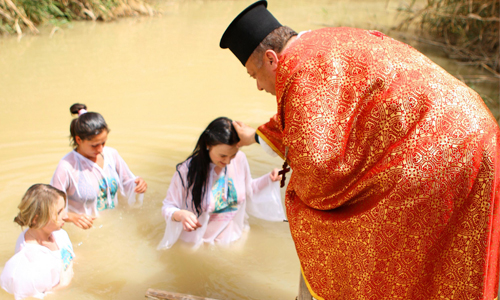 India Blooms News Service | | 09 May 2014, 03:51 pm
#Jordan gears up, # Pope Franciss visit
New Delhi, May 9 (Not in Town/IBNS) There is excitement in the air as Jordan prepares for Pope Francisâ€™ visit on May 24, a trip that marks the 50-year anniversary of the first papal trip to the region.

It has become a papal tradition to follow the steps of Jesus starting in Jordan, home to the pilgrimage site of Bethany Beyond the Jordan. On May 24, the Pope will meet with King Abdullah and Queen Rania. He will also hold mass at an international stadium in Amman where fifty thousand people are expected to attend.

His itinerary will include a visit to the Bethany Beyond the Jordan Baptism site and he is scheduled to also meet with Syrian and Iraqi refugees, both Muslim and Christian, as well as disabled people at the Latin church there.

“We are looking forward to the Pope’s visit,” said Father Rifaat Bader, the spokesman for the Catholic Church in Jordan and organizer of the papal visit. “The Pope wants to draw attention to the plight of those who are suffering as a result of the violence and were forced to flee their homes,” he said.

In Jordan, Christians are a small community and continue to live in harmony with Muslims. The pope’s pilgrimage here is significant for Jordan that is rich with biblical sites and is a model of interfaith and peaceful coexistence.

“The historical visit reflects the country’s religious and touristic significance on the international map,” said Mohammad Al-Momani, minister of information. “It also highlights Jordan’s security and stability as well as its role in renouncing violence and terrorism.”

preparation for the Pope’s visit, the Greater Amman Municipality has put forth an action plan to ensure cleaner and well-lit streets along the route the papal convoy will take.

Since Pope Francis is known to break with protocol, he asked for a smaller vehicle. "He has dedicated his papacy drawing attention to the poor, and he wanted to set an example. We are always expecting surprises from him,” said Father Bader.

The visit of the Pope, the first since his election as leader of the Catholic Church, is an important step towards enhancing fraternity and tolerance between Muslims and Christians as well as the message of peace called for by all monotheistic religions.

His Holiness will discuss with King Abdullah relations between Jordan and the Vatican as well as issues related to promoting fraternity and dialogue and Islamic-Christian coexistence, in addition to the latest developments in the Middle East.

Their Majesties, King Abdullah II and Queen Rania Al Abdullah, made an official visit to the Vatican last August during which they met with Pope Francis I.

The pontiff’s visit to the Kingdom is the fourth in half a century, starting with Pope Paul VI’s tour of Jordan in 1964. The second visit to Jordan was by Pope John Paul II in 2000 while the third was by Pope Benedict XVI in 2009.

Jordan has a wealth of biblical sites across the country, from Mount Nebo to Madaba to Bethany-beyond-the-Jordan which still echo with stories that have been recorded in the Holy Bible. Some of the world’s earliest churches have been found in Jordan, including the 2nd or 3rd century ‘prayer hall’ at Bethany Beyond-the-Jordan, the 4th century church at Umm Qays, and the remains of what is believed to be the oldest purpose-built church in the world at Aqaba.

At Madaba, in the 6th century Byzantine church of St. George, there is the mosaic ï¬‚oor map of Jerusalem and the Holy Land which has helped modern-day archeologists to identify and excavate many of these Biblical sites.

Mount Nebo, just a ten minutes drive west of Madaba, was the final station in Moses’ historic flight from Egypt to the Holy Land. This also became a place of pilgrimage for early Christians from Jerusalem and a small church was built there in the 4th century to commemorate the end of Moses’ life.

The Hashemite Kingdom of Jordan is a modern, vibrant nation and one of the most politically stable nations in the Middle East. From the haunting, primeval starkness of Wadi Rum, to the teeming centre of urban Amman, from the majestic ruins of bygone civilizations to the timeless splendour of the Dead Sea, Jordan is unveiled as a unique destination offering breathtaking and mysterious sights, high standard accommodations, exquisite cuisine and countless activities for all segments of travellers, be it a family holiday, honeymooners, or a MICE event.