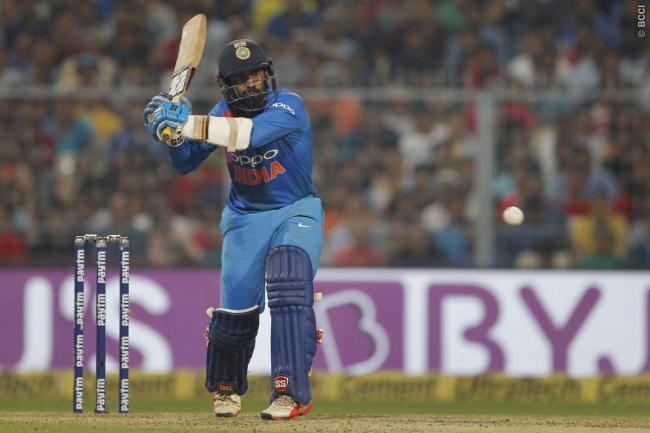 After restricting West Indies for 109 runs for the loss eight wickets, India reached 110 runs by losing five wickets with 13 balls to spare.

After losing quick wickets, Dinesh and Krunal, who made his T20 debut for India, joined to add 27 runs in the sixth wicket partnership to ensure an easy victory at the end for the hosts.

Manish Pandey (19) and Karthik earlier added 38 runs with their willows in the fifth wicket stand which made the Indian innings steady after initial jolts.

Rohit Sharma (6) and Shikhar Dhawan (30 failed with the willow at the beginning of the innings.

KL Rahul contributed 16 runs while Rishabh Pant (1) failed completely as India were left struggling at 4-45 at one juncture of the match.

Thomas and  Brathwaite picked up two wickets for West Indies.

Earlier, Kuldeep Yadav bowled a wonderful spell as West Indies were restricted to 109 runs for the loss of eight wickets in the first T20 match between India and West Indies here on Sunday.

Yadav was brilliant in displaying his skills and ended up picking three wickets by giving away 13 runs in his quota of four overs.

West Indies kept losing wickets at regular intervals and could not gain the pace needed to reach a high scoring total.

Fabian Allen remained the top scorer for West Indies with his 27 runs.

He smashed four boundaries in his knock.

Umesh Yadav, Ahmed, Pandya and Bumrah picked up a wicket each for India.

India take 1-0 lead in the series.