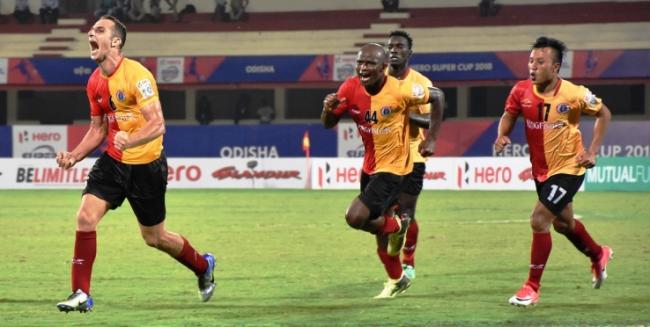 Bhubaneswar, Apr 6 (IBNS): The Hero Super Cup’s penultimate Round of 16 match between Kingfisher East Bengal, who placed fourth in the Hero I-League and were playing their first match of the tournament, and Mumbai City FC, who finished seventh in the Hero Indian Super League (Hero ISL), played at Bhubaneswar’s Kalinga stadium on Thursday, ended with the Kolkata outfit getting the better of the Mumbai side 2-1.

Both coaches Khalid Jamil and Mumbai’s Costa Rican coach, Alexandre Guimaraes, lined up their outfits in identical fashion at the start of the game- four-man defence, packed the midfield and with the lone target man up front. While Mumbai had India striker Balwant Singh as the goal poacher, Nigerian Dudu Omagbeni was entrusted with that role by the Red & Golds.

The first half did not see many goal-scoring chances being created but saw an end to end football and two brilliant goals, one from each side. Mumbai it was who struck first.

In the 22nd minute, Eduardo inflicted a needless challenge to bring down Mumbai midfielder Sahil Tavora about 35 yards out from the East Bengal box. Cameroonian Achille Emana then engineered an outrageous late curl off his right-footer from the resultant free-kick, to leave the East Bengal keeper Ubaid stunned.

The Kolkata giants were quick to hit back when off a ball played ahead by overlapping defender Samad to Laldanmaiwa Ralte,  made the Mizo winger produce a quality cross which found Katsumi Yusa’s head with pinpoint accuracy in the 26th minute. The Japanese just had to time his jump and connect with his head perfectly, and he did not disappoint.

Mumbai had held the lead for just over three minutes. East Bengal were clearly the more attacking side of the half, also evident by the fact that two Mumbai players, Zakeer and Shehnaj had to not only been booked by referee Venkatesh but also forced him to issue final warnings post the bookings.

The second half mirrored the first. The football was end to end, flowing and open, however, lack of imagination and penetration in the attacking third by both sides meant that gilt-edged scoring opportunities were at a premium.

Coach Guimaraes ringed in the changes and played all his cards by bringing in Pranjal Bhumij for Khongjee in the 65th minute, Abinash Ruidas for Zaqeer in the 76th and finally Biswajit Saha for Sahil Tavora in the 84th minute, but it was East Bengal who not only trusted the same 11 throughout the game but also reaped the rewards for being the more enterprising side.

They found the winner in the 73rd minute when first Cavin Lobo from just inside his half found Laldanmawia Ralte with a beautiful ball on the right flank. Ralte trapped well and raced inside the box to unleash a right-footed straight at the Mumbai custodian Amrinder, who brought about a stop. Syrian Mahmoud Al-Amna came rushing in to meet the rebound and connected first-time perfectly to bulge the roof of the Mumbai net.

It was a deserving victory for the Red & Golds who now move onto play Aizawl FC in the quarter-finals.