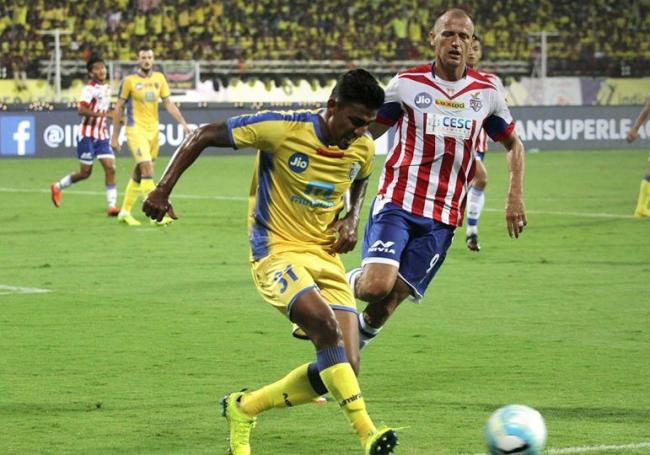 Blasters, ATK settle for a point each in opener

Kochi, Nov 17 (IBNS): Kerala Blasters and ATK played out an entertaining goalless draw in front of a packed house in the Hero Indian Super League’s season opener at the Jawaharlal Nehru Stadium, Kochi, on Friday.

Both teams took a combined 17 shots, attempted a combined 34 crosses and pumped in 11 corners, but to no avail. This was also the first 0-0 result between the two sides, with ATK failing to win their first away match of a season for the first time in ISL history.

Neither team took a lot of time to warm up, with both defences opened up in the early exchanges. Milan Singh sent a rasping shot narrowly past the post within the first five minutes but the best chance of the first 45 minutes fell to ATK’s Hitesh Sharma. The ball fell kindly for him after good play down the right by Rupert Nongrum, and his shot from a one-on-one situation was parried away by onrushing goalkeeper Paul Rachubka.

ATK then saw their tricky winger Zequinha’s curling shot hit the post; its clatter triggering a sigh of relief in the stadium. The visitors may have nipped it in terms of the better chances created, but Kerala Blasters will rue the missed opportunities they had to score. Former Manchester United striker Dimitar Berbatov was left waiting for a good cross too many times and Iain Hume’s industry proved futile with the former ATK forward taken off at the hour mark.

While ATK relied on slow build-up play, Blasters looked for quick breaks going forward. Berbatov slowly but surely grew into the game, setting up a few attacks with his trademark perfectly weighted passes and it was his expert touch that set up both CK Vineeth and Rino Anto down the right whenever they went forward. The Blasters made good use of set-pieces as well, but Sandesh Jhingan’s attempts skidded off his head amid a crowd of defenders in red and white.

The home side started the second half brightly, with Berbatov and Courage Pekuson combining to put Vineeth through down the left. He cut in and shot but it was palmed away by Debjit Majumder, who had earlier frustrated Berbatov in trying to find space to pull the trigger.

As Kerala grew wasteful, ATK gained confidence, especially after Robin Singh replaced Finnish striker Njazi Kuqi. But the Indian No 9 couldn’t convert a low cross on his stronger left side.

In a way, it personified the match and both managers will go into their next game looking for more sharpness while going forward.