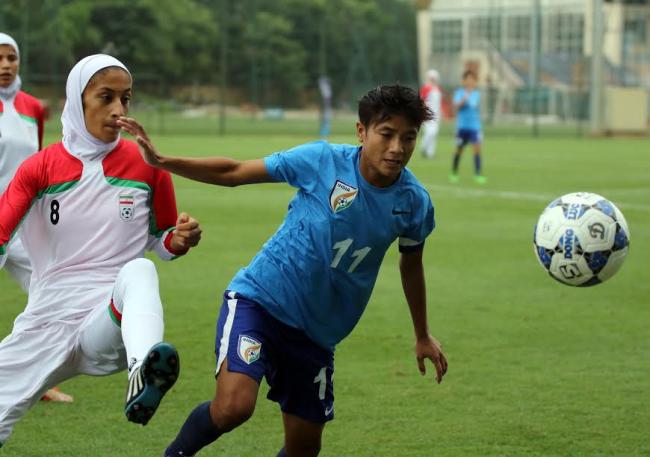 Leading by a Kashmina goal scored in the 59th minute, a desperate Iran managed to pull it back when Mokhtarifar slot it home with 9 minutes to go. India were down to 9 Players on the field at that moment as Shetty and Captain Ratanbala were being treated outside the playing arena.


Kashmina’s goal came straight out of the text book. It was a counter-attack from which Shetty sped past her marker on the right flank and essayed it for Kashmina in the box. The nippy Striker took her time, sidestepped, and neatly placed it in.


Kashmina, however, should have finished it off when she beat the off-side trap and found her in a one-to-one situation with rival Goalkeeper Sefati in the 87th minute. But the goalie managed to get her palm in the way as the ball missed by a whisker.


The Indians looked spirited on the field. Despite the Iranians using their physical superiority to their advantage, the Indians didn’t shy away from the fight. The girls caught hold of the loose balls, played in between the gaps and moved on. On occasions, however, the over enthusiasm got to them with mispasses spoiling a promising counter-attack.


In the first half, the Indians were much faster off the blocks. They took control of the proceedings in the first 15 minutes forcing the rivals into their own half. There was a barrage of attacks, both from the flanks and down the middle.


In the very second minute itself Ranjana was quick to spot the rival Goalkeeper Sefati off her line but her lob sailed over.


The nimble-footed Kashmina who left an impression played it between the defenders for Bawitlung Vanlalhriattiri (Shetty) in the 6th minute but a timely tackle from rival Captain Motevali averted the danger for Iran.


Much against the run of play, Iran were handed a chance in the 20th minute. Defender Sweety Devi fumbled as she let the Ball between her legs and even as Khodabakshi was about to pull the trigger from inside the box, Jabamani intercepted it to clear for a corner.


Midway into the first half, the Iranians slowed it down. They played among themselves trying to play the waiting game and disrupt India’s momentum. But the Indian were not to be deterred.


Following up on a Ranjana free-kick, Jabamani leapt high above all but missed the flight which otherwise would have put India into the lead.

In the 37th minute, Skipper Ratanbala, the pivot on which India rotated proceedings, shrugged off a couple of defenders with a deft turn but her powerful right-footer went straight to Sefati.


Changing over, Iran preferred to open up, and stress more on attack. The Indians defended in numbers as the ploy was to catch the rivals on the fast counter attacks.


Off such a counter, Ratanbala almost gave India the lead in the 57th minute. She effortless dribbled past three and entered the box but her shot narrowly missed the target.


Iran had their best chance to equalise in the 71st minute when they were awarded a penalty but it sailed wide.


But it should have ended India’s way. In the 89th minute, Shetty with all the space preferred to shoot from a distance. A couple of steps could have taken her to a better position and perhaps garnered full points.