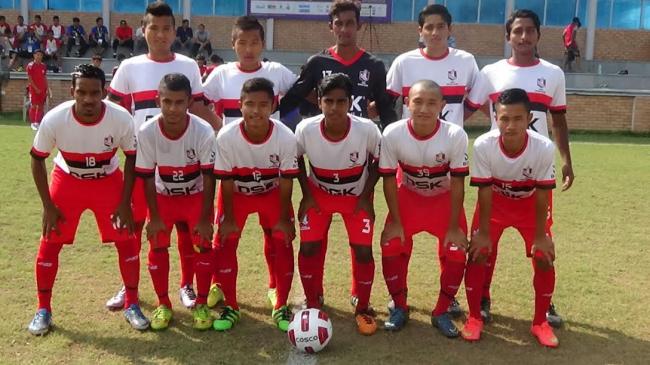 Making their debut in the tournament, DSK-LIFA did well to create many close chances before being done in by a second half strike by Naved Muhamndi.

DSK-LIFA started aggressively no sooner the match kicked off. In the opening minute a combined move, which began off a clearance by defender Tapas Pal, had Umer Sayed do well to turn inside and find winger Sudipta Malakar. Moving into space ahead, Sudipta found midfielder H Zawnhming Thanga, who in turn released a defence-splitting pass for Omkar More, who ended up falling short and the ball rolling out for a goal kick.

Growing in confidence, DSK-LIFA went very close in the fifth minute via an effort from Omkar. Sudipta’s stiff try went into an Afghani defender resulting in Zawnhming Thanga picking up the deflection and finding Asraf Mondal. A quick cross that followed had Seigoumang Doungle play the ball over the defence line for an unmarked Omkar whose first timer was saved by the rival custodian.

As the game progressed, DSK-LIFA once again created an anxious moment for the Afghan goalkeeper. Asraf, intercepting a long ball, was quick to play a wall pass to F. Malsawmtlunga and move forward. A back pass, after that, opened up space for Malswamtlunga to release a long ball for Umer, who in turn flicked over the goalkeeper but to his dismay, the effort went agonisingly wide.

At the breather, both teams were locked goalless.

Seven minutes after the resumption, DSK-LIFA conceded a goal that resulted off a corner-kick. The delivery into the 6-yard box ended up getting deflected to the opponents’ striker just when ‘keeper Raja Hela seemed to have collected the ball. As a result, the striker cashed in on the opportunity.

Down by a goal, DSK-LIFA almost equalised. Into the 53rd minute, Zawnhming Thanga found Malsawmtlunga inside the box on the right. A deft cross by Malsawmtlunga to the second post created a chance for Umer, who headed on target but found the Afghan goalkeeper save.