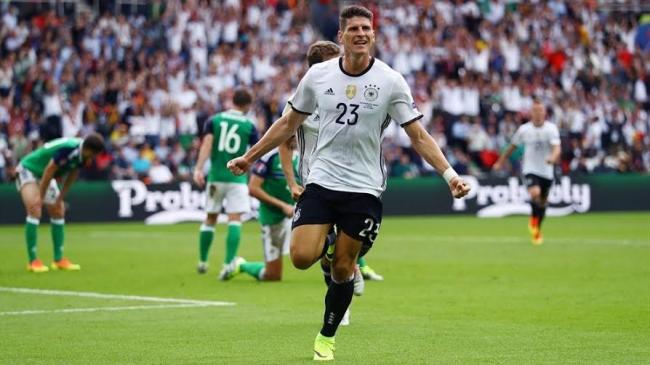 India Blooms News Service | | 22 Jun 2016, 01:29 pm
#Germany, #UEFA EURO 2016, #Northern Ireland, #Thomas MÃ¼ller, # Mesut Ã–zil
Paris, Jun 22 (IBNS): Germany progressed to the last 16 of UEFA EURO 2016 with a narrow but deserved victory against Northern Ireland, who did not have to wait long to find out that they are through as one of the best third-placed finishers.

Making his first start of the tournament in attack, Mario Gomez found the target with almost half an hour gone, though subsequent German celebrations were tinged with relief after a plethora of chances had gone begging beforehand. Thomas Müller, Mesut Özil and Mario Götze all missed glaring opportunities – Müller hitting the post and bar – though credit must go to Northern Ireland goalkeeper Michael McGovern for his part in denying them. In truth the scoreline could and should have been a lot more discernible with the Northern Irish offering next to nothing in attack. Germany threatened twice early in the second half but Götze again could not convert and was hauled off soon after. Victory was never really in danger, though, and Joachim Löw's wish to play the next round in Lille was granted. Results later on Tuesdaymeant Northern Ireland got their wish, too. Man of the match: Mesut Özil (Germany)