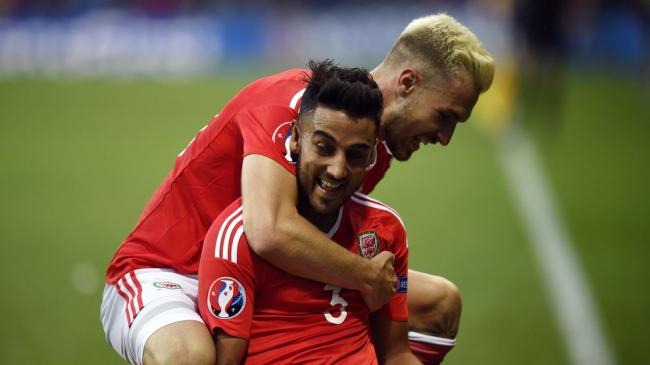 India Blooms News Service | | 21 Jun 2016, 09:56 am
# Wales, #Russia, #Euro Cup
Toulouse, June 21 (IBNS): Wales stormed through to the knockout phase of their first UEFA EURO finals as they eliminated Russia and won Group B into the bargain.

No team in France had been as quick out the traps as Wales in their first two games and they were at it again in Toulouse, Gareth Bale forcing Igor Akinfeev into an early save. Come the 11th-minute mark they led as Joe Allen's perfect ball sent Aaron Ramsey clear to calmly chip over the challenging Akinfeev and in.

If the Wales fans were joyful then, nine minutes later they reached new stratospheric heights of elation when Neil Taylor, who had not scored a competitive goal above England's fifth tier – six years ago – was played in by a deflected Bale pass and poked the ball past Akinfeev at the second attempt. It could have been more before the interval, with Akinfeev denying Sam Vokes, preferred to Hal Robson-Kanu and Jonathan Williams up front with Bale.


At half-time Leonid Slutski tried swapping the Berezutski twins – having an unhappy 34th birthday – as Aleksei replaced Vasili. But there was little Russia could do to stem the Welsh tide, and Bale made it three with the outside of his boot. With England held by Slovakia, Chris Coleman's side are, in the words their supporters constantly chanted, "top of the league".