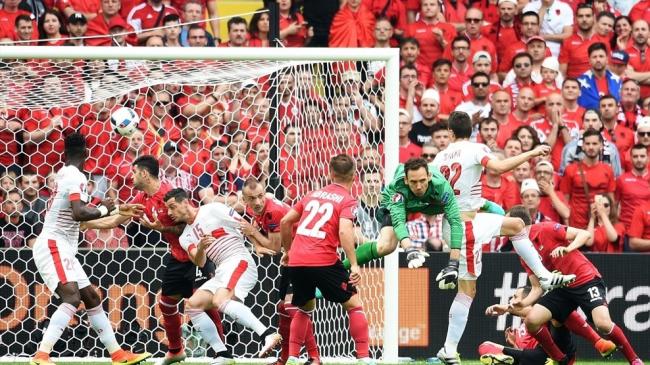 Switzerland hold on against ten-man Albania

The match was only five minutes old when the Nati capped a bright start with the only goal, Fabian Schär rising to head in Xherdan Shaqiri's corner.

The margin of victory looked set to be greater when Lorik Cana received a second yellow card nine minutes before half-time, but Albania dug in well and by the final whistle the Swiss were hanging on.

Albania will look back on several missed chances to cap their finals debut in style, most notably for Armando Sadiku. He squandered a golden opportunity before Cana's dismissal when a trademark Elseid Hysaj long ball sent him one-on-one with Yann Sommer.

The keeper repeated the feat in the closing stages as Albania, spirited along by their noisy fans, threw everything at Switzerland. Then, with three minutes left, came the best chance of all but Shkëlzen Gashi, with time and space, could not find a way past Sommer.

Switzerland got the win they so desired. They have yet to make it through the group stage in three finals appearances. After holding on here, they may not get a better chance.