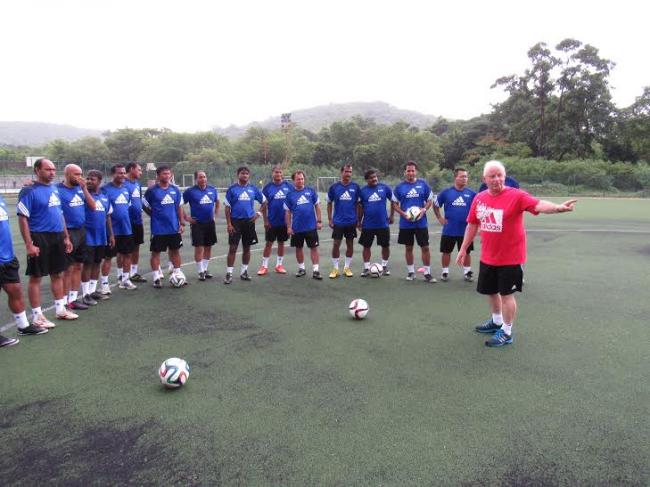 India Blooms News Service | | 22 Jun 2015, 08:49 pm
#Indian coaches hail FIFA elite course
New Delhi, June 22 (IBNS) Evolution is an important component in the intrinsic composition of any Football Coach. It not only helps to tune with the dynamic scenarios of World Football but also enables him to adapt with the volatility of the 90 minutes which often boils down to that one decision, that one substitution, that change of tactics, all of which could make or break a Team's season.

In this quest of evolution and transition, 31 Club Coaches including the likes of Armando Colaco, Derrick Pereira, Sanjoy Sen, Thangboi Singto, Santosh Kashyap and Savio Medeira - ranging from the Hero I-League to the Second Division participated in the FIFA Elite Course which was held in Margao, Goa from June 18-June 22, 2015.

The FIFA Elite Course acted as a feeder of Modern day Elite Coaching in Club Football, which included topics like tactics, system and philosophies. The Course also acted as a platform to brush up some of the fundamentals of the game, whilst acting as a catalyst to the evolving breed of Indian Coaches.

This year’s FIFA Elite Course was conducted by Jochen Figge from Germany, who besides being a FIFA Instructor is also a technical Member of the DFB. Over the years,Figge has also coached several National Teams namely Guinea, Zambia, Trinidad & Tobago and Ethiopia, and has also being actively involved in several development Programmes both for FIFA and DFB.

Talking exclusively to www.the-aiff.com, McDowell Mohun Bagan’s Head Coach Sanjoy Sen, who led the Green and Maroon brigade to their first ever Hero I-League Trophy, expressed the gravity of the Word evolution in a Coach’s dictionary.

“Every Coach has to evolve with every passing game. And the inability to do so will render you from winning matches. We must adapt with the ever-changing scenarios in World Football and this Course has enabled us to do just that.”

“It is imperative for Coaches to learn, from anything and everything in the Footballing cosmology. Coaches are like Teachers, and the common dividend amongst both is knowledge. If knowledge is absent, both will perish,” he added.

With Indian Football on an upward spiral, Indian Coaches have to also adjust to the high level of competition present within the game, which was evident in the this year’s Hero I-League wherein the relegation and title battle, both perspired on the last Match day.

Royal Wahingdoh’s Santosh Kashyap, who successfully navigated the Shillong based Team to a third place in their first season in the Hero I-league, elucidated the importance of FIFA Elite Courses.

“Courses such as these help you a lot, as they tend to evolve you as a Coach and also brush up some of the important fundamentals that sometimes you oversee,” he maintained.

“Also this gives us an opportunity to learn from some of the best in the business and adapt likewise,” Kashyap added.

“We know that the competition within the Hero I-League is immensely on the rise and to be at par with that. You have to learn. This Course offers us just that.

“This is an excellent initiative from AIFF,” echoed Shillong Lajong’s Head Coach Thangboi Singto, who was also one of the Participants. “I believe we will go back with more knowledge and as better Coaches,” he quipped.

“Every Coach has to grow in the Footballing World. Every Coach has to hone his skills, increase his potential and ability. All of this is possible only if you are hungry to learn as a Coach,” opined Salgaocar’s Head Coach Derrick Pereira.

“A Coach should be willing to garner Footballing knowledge, if he has to succeed in the position. The Course has been received as a welcomed commodity by every one of us. We thank FIFA for organizing it”, he quipped.

Juxtaposing a Coach against a Player, one of the most successful Coaches in the Indian Football, Armando Colaco, who lead Dempo SC to five League titles said: “A Coach should be as hungry as a Player to learn, evolve, perform and be the best. It goes with saying that a Coach has to lead his troops by example.”

“This Course has enabled everyone of us to gain knowledge from the best in the business,” he added. “It is necessary for Coaches to evolve with the trends in modern Football, as the inability of it will act as a clog for the Team.”

In tune with Colaco, Savio Medeira explained: “A Coach should act as a beacon of hope for the Players. And that is only possible if the Coach gets favorable results, and to get results one has to adapt, learn and evolve.”

“It is imperative as a Coach to learn. And this Course has acted as a great chapter of learning. I thank everyone involved in this Course, the AIFF, FIFA, for conducting this,” Savio added.

The list of Coaches who attended the Course stay as follows: