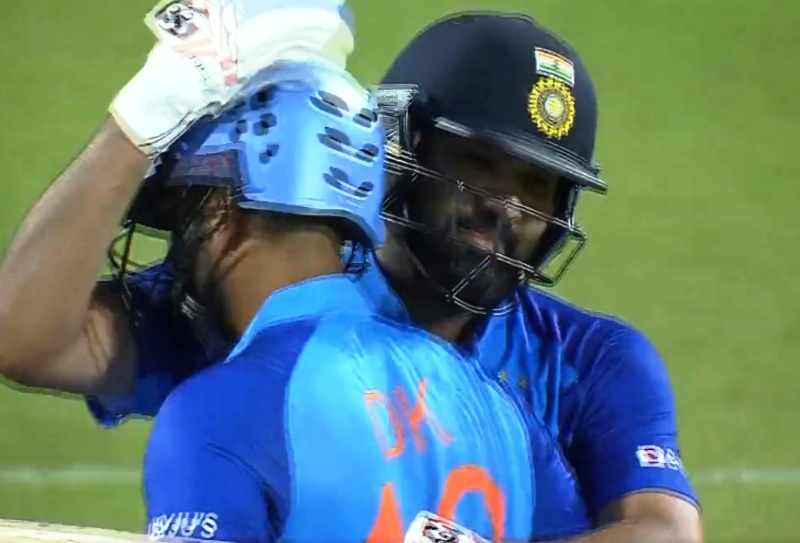 Axar Patel and Jasprit Bumrah's impressive spell with the ball laid the platform for the hosts.

The match was reduced to an eight-over-a-side contest due to two-and-a-half hours of loss of play because of a wet outfield. The city experienced heavy downpours last night.

Rohit was at his classical best as he smacked Josh Hazlewood for two consecutive sixes in the first over to set the tone.

Though Rohit lost KL Rahul (10), Virat Kohli (11) and Surya Kumar Yadav (0) early on to leg-spinner Adam Zampa, he was not shackled. He was determined to stay till the end and he did it by getting much-needed boundaries in death overs.

Needing 9 runs off the last over, Dinesh Karthik finished the game in the first two balls to the delight of Indian fans.

Axar Patel was outstanding in restricting Australia first up. He just conceded 13 runs in his two-over spell with the new ball.

Earlier, Cameroon Green did not last long as he was run out. Continuing his good show, Axar removed hitters, Glenn Maxwell and Tim David.

Australian captain Aaron Finch made 31 in just 15 balls. He was cleaned up by comeback boy Jasprit Bumrah who hurled an unplayable yorker.

Matthew Wade's unbeaten 43 off 20 balls powered Australia to a challenging 90 for 5.