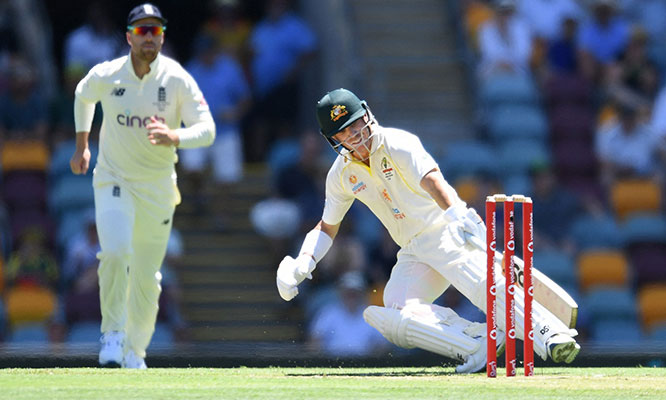 The Ashes: Head, Warner, Labuschagne shine as Australia lead England by 196 at stumps on day 2

Brisbane/UNI: Australia top-order batters Travis Head, David Warner and Marnus Labuschagne helped Australia reach 343/7 at stumps on the second day of the first The Ashes Test against England here at The Gabba on Thursday.

The hosts lead the visiting side by 196 runs.

Australia's innings started half an hour early to make up for the time lost due to rain and subsequent bad light on day one.

The hosts didn't have the best of the starts as Ollie Robinson struck for England early in the first session, dismissing Marcus Harris for three.

The hosts recovered quickly as opener Warner and Labuschagne stitched a 156-run partnership for the second wicket.

The left-arm spinner Jack Leach got the much-needed breakthrough for England as he got rid of Labuschagne for a well-made 74. The right-hander played a cut shot straight to point where Mark Wood caught the Australian.

Wood joined the party as he got the big fish Steve Smith for 12.

Warner, who was standing strong on 94, was denied his 25th Test century as he scooped to the covers area off Robinson.

The England pacer bowled Cameron Green for a golden duck on the next delivery before debutant Alex Carey survived on the hat-trick ball.

Carey along with Travis Head helped Australia cross the 200-run mark. Chris Woakes broke the 41-run stand as he dismissed Carey for 12. The wicket-keeper batter swatted the ball straight to mid-wicket where Ollie Pope caught him.

The left-hander Head raised his bat to celebrate his eighth half-century in the red-ball cricket. Head dispatched the ball through the covers for a boundary to bring up his fifty off Wood.

Head started attacking the bowlers, with back-to-back fours off Leach and Ben Stokes. The England captain Joe Root ended the 70-run partnership between Head and Cummins as the Australia captain was caught at slip for 12 after the duo brought up 300 for the hosts.

England took the second new ball ahead of the 81st over. Head screamed to celebrate his third Test century off 85 balls as he drove the ball through mid-on off Chris Woakes.

In the next over, the left-hander was floored with a beamer off Wood, with the ball hitting his glove before deflecting onto his jaw.

Nonetheless, Head continued after being attended by the physios on the field. The left-handers Head and Mitchell Starc remained unbeaten on 112 and 10, respectively at stumps.