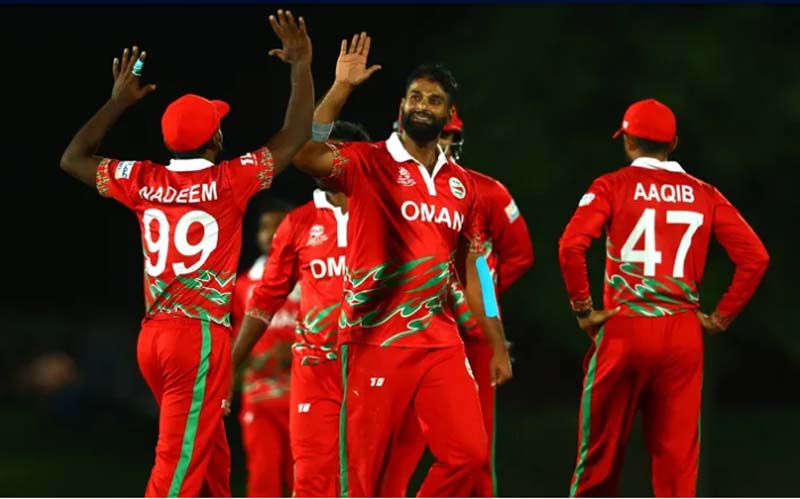 Maqsood bagged four wickets that restricted the opposition to 129/9, before half-centuries from Jatinder and Aaqib's blades eased them past the target in 13.4 overs.

Not much went Guinea's way after they found themselves zero for two inside the first two overs, with captain Assad Vala’s fifty the only highlight for them on a difficult day.

The openers began the run chase without any pressure and did not flash at the balls during the Powerplay. The testimony to it was Aaquib who hammered one for a six only in the eighth over of the innings.

Jatinder was first to reach his fifty off 33 balls after he smacked a six over long-on off a free hit.

He celebrated his milestone with his trademark celebration.

Aaquib, who had been caught off a no-ball, got to his half-century in 43 balls, before Jatinder sealed the game with a final six.

Put into bat, Guinea overcame a disastrous start with the help of a record third-wicket stand of 81 off 60 balls between captain Vala and Charles Amini.

Vala was top-scored for Guinea, blazing up an entertaining 43-ball 56.However, the middle order collapsed just like their top order, as they could not handle Maqsood, who bagged three wickets in his second over.

Guinea lost both openers in the first two overs of the match with Oman's new-ball pair of Bilal Khan and Kaleemullah wreaking havoc.

Bilal scalped the first wicket of the tournament when he got Tony Ura edge one onto his stumps.

The next over, Kaleemullah had Lega Siaka chopping onto his stumps a straighter one.Despite this, Amini and Vala, kept cool and upped the ante.

For most part, Amini being the aggressor, who got going with a couple of boundaries.

The partnership had guided the World Cup debutants to 70 at the halfway mark when a direct hit from Mohammad Nadeem broke the stand.Amini, who had set off for a single from the non-striker’s end, couldn’t make it back in time as Nadeem did a smart bit of work off his own bowling.

Vala brought up his fifty with a straight six. However, he was caught by Jatinder at long-on, trying to raise the tempo.

Vala's departure in 15th over triggered a collapse and the middle and lower order could only add 27 more to 102 runs, when he walked back to the dugout.

Next, Maqsood sent back Norman Vanua, Sese Bau and Kiplin Doriga in one over. Excellent catch by Nadeem of Damien Ravu, gave the captain his fourth wicket.

He finished with four for 20.Oman next play against Bangladesh Tuesday, while Guinea face Scotland in the first match the same day.