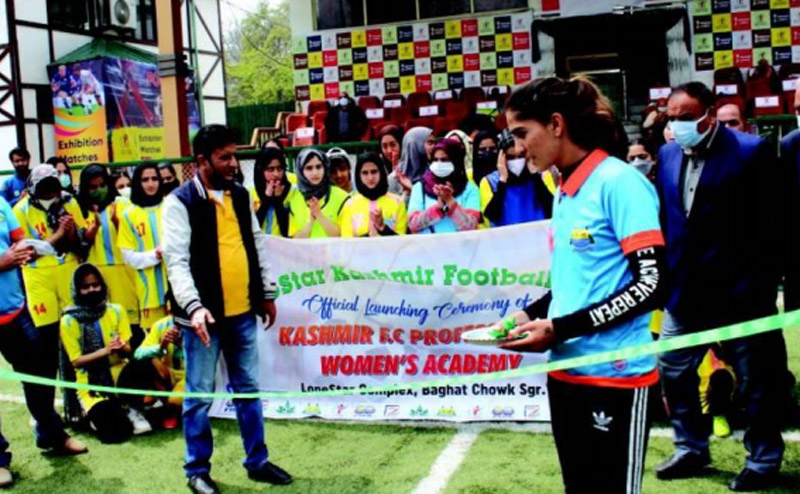 “As we all know that football has been a favourite game in Jammu and Kashmir. As far as this game is concerned, boys have a platform in the form of departmental teams and private clubs to showcase their talent, however, the girls lacked such a platform,” Thakur told Greater Kashmir.

He said JKFA wanted to provide a platform to girls interested in the game.

“We went to Women’s College two years ago and several other schools. We requested them to make a girls team so that they could participate in the girls’ football competition which would be organised by JKFA.”

“We even organised such competitions in the past but didn’t receive much response. Then JKFA decided to create a professional sports culture for girls. As such, we requested the LoneStar Kashmir Football Club, which is affiliated with JKFA, to start a girls team. They not only agreed for a girls team but said they will launch an academy too so that young girls would be trained by professional coaches with the latest facilities,” Thakur said.

Nadia Nighat, the first female AFC certified football coach in J&K and presently the coach of LoneStar girls team, said the academy was an opportunity for girls to come and play football under well qualified and professional coaches.

“Around 10 years ago, I was the only girl playing football among boys. Now we see many girls joining the game and this is a good opportunity for them to benefit from this platform and play in national and other leagues in future,” she said.

General Manager LoneStar Football Club, Imtiyaz Ahmad Khan, said the academy was initially launched in 2019 but due to political situation in J&K followed by Covid-19 pandemic, it was shut down.

“While the boys team was already there, now we have started a girls team. We had identified the talent of girls. Our chairman who is passionate about football said let’s provide opportunity to girls and boost their morale, as part of women empowerment,” he said.

Khan said in Kashmir, there were no facilities for girls in sports.

“So what we did was to bring coaches from outside to train them as these girls have talent but the LoneStar wants to provide them skills through these coaches,” he said.