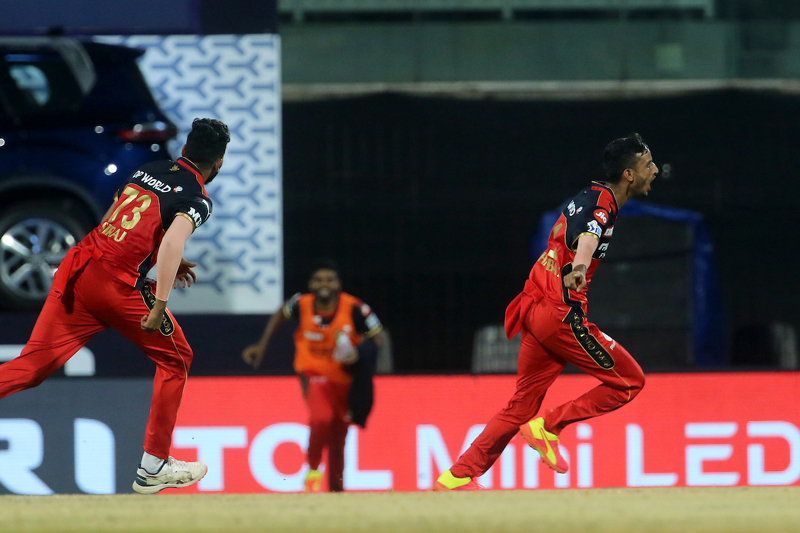 In reply, SRH were restricted to 143/9 after 20 overs, losing the match by 6 runs. With this win, RCB moved to the top of the table.

Chasing a modest total, SRH lost opener Wriddhiman Saha (1) cheaply in the beginning of the third over. However, skipper David Warner (54) and Pandey revived SRH innings.

The duo smashed boundaries every over to keep the SRH in the chase as they needed 73 off the last 10 overs.

However, Kyle Jamieson gave RCB the much-needed breakthrough by removing Warner in the 14th over.

After Warner's dismissal, the required run rate increased after his wicket. Bairstow, Pandey and Samad tried to target Shahbaz Ahmed but mistimed their shots to return to the pavilion in the 17th over.

Vijay Shankar (3) and Jason Holder (4) too struggled as SRH kept on losing wickets. Even Rashid Khan’s nine-ball 18 cameo was not enough to get them over the line. This is SRH’s second loss on the trot while chasing.

Shahbaz Ahmed (3/17) was the star performer for RCB with the ball.

Earlier, RCB were off to a decent start with Kohli and opener Devdutt Padikkal (11) hitting a few boundaries.

However, Bhuvneshwar Kumar (1/30) gave Sunrisers their first breakthrough in the third over of the innings by removing Padikkal.

Shahbaz Ahmed was the next to get out after playing a quick cameo, leaving RCB at 47 for two.

At the halfway mark, Maxwell raised the tempo as the big-hitting Australian smashed Shahbaz Nadeem (1/36) for two sixes and a four in the first three balls of the 11th over, with Kohli joining the party with a boundary.

From there on, Kohli and Maxwell joined hands to revive RCB's innings. The duo tried to up the tempo by hitting some sixes and boundaries.

They stitched a 44-run partnership before Jason Holder got rid of Kohli in the 13th over.

AB de Villiers, who came to bat next, also couldn't do much as got out to Rashid Khan. The Afghan spinner struck once again, getting rid of Washington Sundar (8).

RCB suffered lost quick wickets before the death overs which had a major impact on RCB’s final score.

Maxwell smashed three fours and a maximum in the last three overs to take RCB to 149/8.