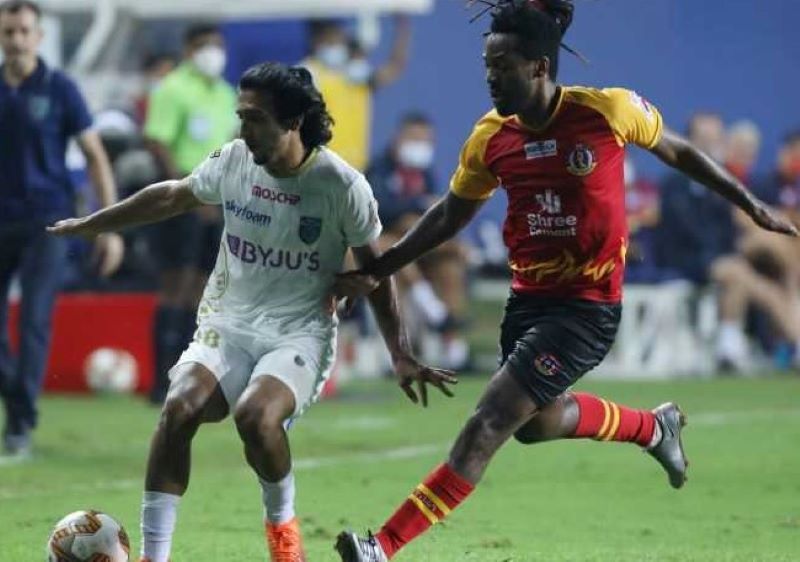 Goa/IBNS: Scott Neville’s stunning header in the dying minutes of the match, helped SC East Bengal salvage a point against Kerala Blasters in the Hero Indian Super League at the Tilak Maidan  Friday.

Jordan Murray put Kerala ahead in the 64th minute before Neville’s stoppage-time equaliser (90+5) ensured that SCEB extended their unbeaten run to six games. The result mirrored that of the reverse fixture between the two, when Kerala had punished SCEB with an injury-time equaliser.

SCEB named an unchanged eleven while Kerala made only one change as Nishu Kumar returned to the starting line-up.

The first half was an end-to-end contest, with both sides creating plenty of chances but strikers on either side lacked the finishing.

Both keepers were tested early on. And it was Kerala who created the first big chance of the game. Receiving a diagonal ball, Murray fired a shot that was parried away by Debjit Majumder.

At the other end, Albino Gomes had to pull off another fine save to stop SCEB from taking the lead, denying Harmanpreet Singh from close range.

SCEB started the second half in control and fashioned a chance soon after the change of ends. During the 47th minute, Bright Enobakhare drilled a low cross towards the goal from the left. Jessel Carneiro, however, made a crucial goal-line clearance after initially failing to deal with the ball.

But it was Kerala who broke the deadlock moments later after a lapse in concentration from the SCEB defense.

Murray latched on to a long ball from Gomes, beating his marker before slotting past Majumder.

SCEB threw caution to the wind after the goal, making attacking substitutions as they sought their way back into the game.

In the dying minutes, they created a golden chance from a set-piece that could’ve drawn them level. Ajay Chettri delivered a wonderful cross from a free-kick which substitute Aaron Holloway failed to convert.

But SCEB’s persistence finally paid off in injury time as they leveled from a corner. Enobakhare’s cross found an unmarked Neville, who buried his header into the net and ensured SCEB went home with a point.