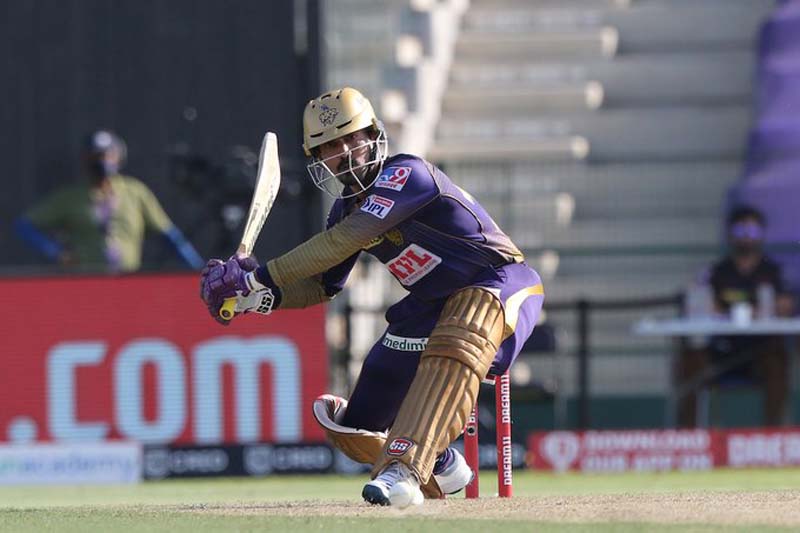 Abu Dhabi/UNI: Half centuries from skipper Dinesh karthik 58 off 29 balls and Shubman Gill 57 off 47 and fourth wicket partnership of 82 runs between duo helped KKR post a fighting 164/6 in 20 overs against Kings XI Punjab in the 24th match of IPL at the Sheikh Zayed Stadium, here on Saturday.

Morgan also played his part with 24 off 23 which included 2 fours and a six.

But it was Karthik and Gill's late fireworks with fours and sixes that took KKR to a fighting total 164/6.

Earlier, KKR won the toss and opted to bat first.

KKR started on a shaky note losing two wickets quickly first of opener Rahul Tripathi at (4) in 3rd over bowled by Mohammed Shami and then in 4th over Nitish Rana run out at (2).

Eoin Morgan and Shubman then rescued the team from further damage control stiching 49 runs for the third wicket.

The partnership of Morgan and Shubman was broken when Ravi Bishnoi bowled Morgan in 11th over at 24 off 23 balls (2 fours, 1 six). KKR lost their third wicket at 63 runs.

Shubman Gill who was going strong went down in 17.5 over after being run out at 57 off 47 balls (5 fours). KKR's lost its fifth wicket in form of Andre Russell in 18.2 over bowled by Arshdeep Singh at 5.

For Punjab Shami, Arshdeep and Bishnoi took one wickets each.