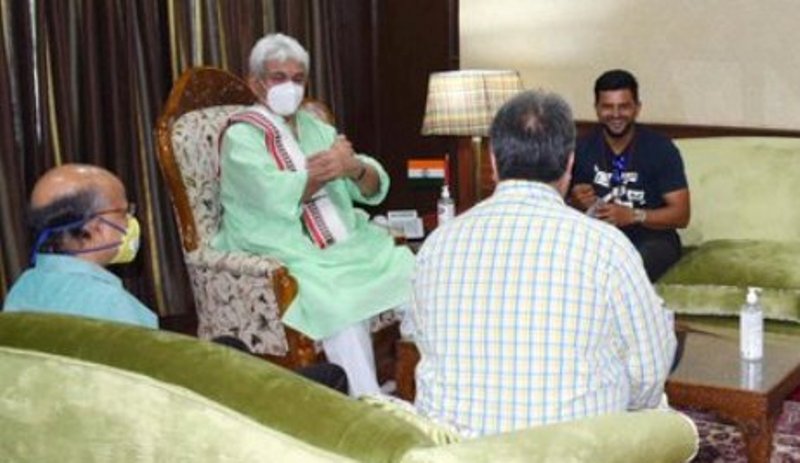 Srinagar/UNI: International cricketer Suresh Raina has announced to set up ten schools in the Union Territory (UT) of Jammu and Kashmir to train the aspiring cricketers, particularly the youngsters from remote areas.

Raina, who opted out from the Indian Premiere League(IPL) starting from Dubai from Saturday evening, arrived here on Friday on the invitation by Director General of Police (DGP) Dilbagh Singh.

An official spokesman said Raina called on Lt Governor Manoj Sinha last evening at Raj Bhavan an agreed to set up five schools in Kashmir division and an equal number in Jammu division to train the aspiring cricketers, particularly the youngsters from remote areas of the UT.

Raina said that talent would be identified and selected from all regions of J&K, trained by professionals and would be equipped to play at the International level.

The Lt Governor appreciated the gesture of the cricketer. He also informed Raina of the government’s resolve of developing sports culture in the UT. ‘With sports and education, we shall give a new direction to the talented youth of J&K’, said the Lt Governor.

Earlier, Rain called on the DGP Dilbag Singh at Police Headquarters and had a discussion about a series of plans of J&K Police for encouraging local youth in honing their sports skills.

At the very outset the DGP thanked Raina for visiting Police Headquarter (PHQ) and appreciated the commitment of the star player for volunteering his services in youth engagement programmes in the UT of Jammu and Kashmir. He said that the presence of the star cricketer in Jammu and Kashmir will help in connecting with the people particularly the youth, thus channelizing their energy in positive directions.

Raina said that he wants to promote sports amongst youth of Jammu and Kashmir. He said that he would like to guide talented youngsters or children from various parts including schools', colleges and rural areas of J&K.

Immediately after Raina, who was playing for Chennai Super Kings in the IPL, announced his retirement from International cricket DGP approached him to train crickets in the UT. Raina returned from Dubai after opting out from the IPL.

In a letter to DGP J&K had written to Raina for promotion of cricket in Jammu and Kashmir by identifying talented youngsters particularly underprivileged kids in the union territory.