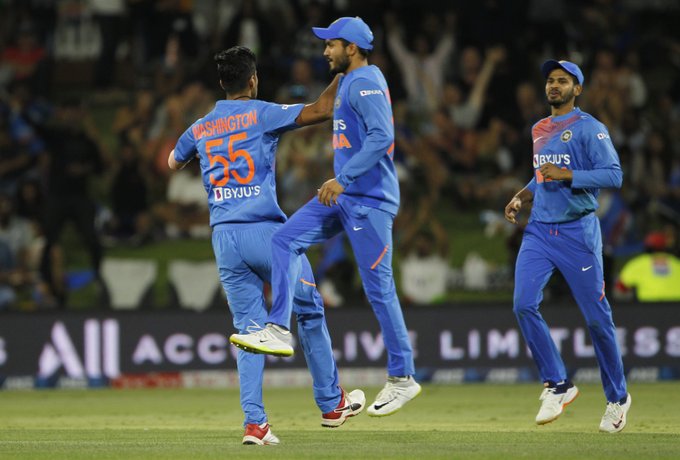 Mount Maunganui/IBNS: Creating history, India completed total domination over New Zealand as the visitors defeated the hosts by seven runs in the final T20 match to clinch the series 5-0 here on Sunday.

KL Rahul, who led the side in the absence of injured Rohit Sharma in the second half of the innings, showed his strong skills as skipper when he guided the side to a close victory against the World Cup runners up team.

Regular skipper Virat Kohli was rested for the match.

Ish Sodhi (16*) hammered two huge sixes in the last over but Thakur kept his nerves calm to manage a victory for his team in the final match.

The match was not much important for India as the side had already clinched the series.

However, keeping the World Cup in mind, the match was crucial as India were left with the chance of experimenting with the team selection.

Seifert (50), Ross Taylor (53) contributed with their willows as New Zealand slowly inched towards the target.

However, Washington Sundar (1/20), Jasprit Bumrah (3/12) Saini (2/23) and Thakur (2/38) managed to take wickets at regular intervals and prevented the hosts from winning the final match of the series.

New Zealand had started the innings poorly as they were left struggling on 3/17 at the beginning.

Bumrah once again returned at his best when he disturbed the opponent with his perfect performance.

Despite the failure of Sanju Samson (2) with the willow, KL Rahul (45) and Rohit Sharma (60) forged a 88-run stand for the second wicket to help India stabilise the innings.

Iyer contributed 33 runs as India scored 163 for the loss of three wickets in the innings.

This is the first 5-0 T20 series win by India in New Zealand.