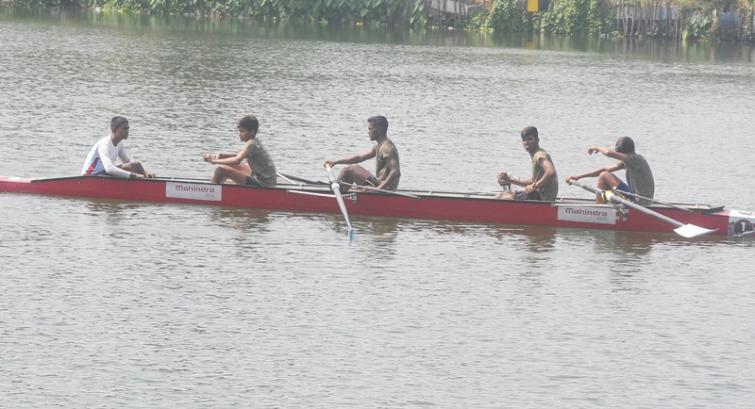 Kolkata, May 7 (IBNS): Former Champions in the junior boys category Jatragachi Pranvananda High School from North 24 Parganas district along with Modern High School “A” and “B” and La Martiniere for Girls “A” entered the quarter finals of the junior boys and girls divisions respectively on day three of  the 47th All india Invitation School Regatta being held at the Lake Club course in Rabindra Sarovar lake here Tuesday.

It is indeed a creditable performance by the Jatragachi boys as they belong to poor families in North 24 Prgana villages and could practice in Rabindra Sarovar only for a couple of months which was provided free by Lake Club. In spite of the handicap, they maintained their top billing. Displaying fine grit and determination, they defeated La Martiniere Boys “B”  easily today. Competing in the group “A” of the junior boys category they out rowed  St. Sebstian on Monday. St. Sebastian, however made their entry  into the quarter finals as they beat La Martiniere Boys “B” in the three team group today.

La Martiniere for Girls, who bagged the title last year, did well as their “A" team today defeated South Point without exerting much to move into the last eight stage. The two other quarter finalists from junior girls group – Modern High “A" and “B” today  beat National High School CBSE “B” and GD Birla High School respectively.

All other quarter finalists of the championship would be determined after conclusion of the league races tomorrow.

Following are the results of the races held on Tuesday