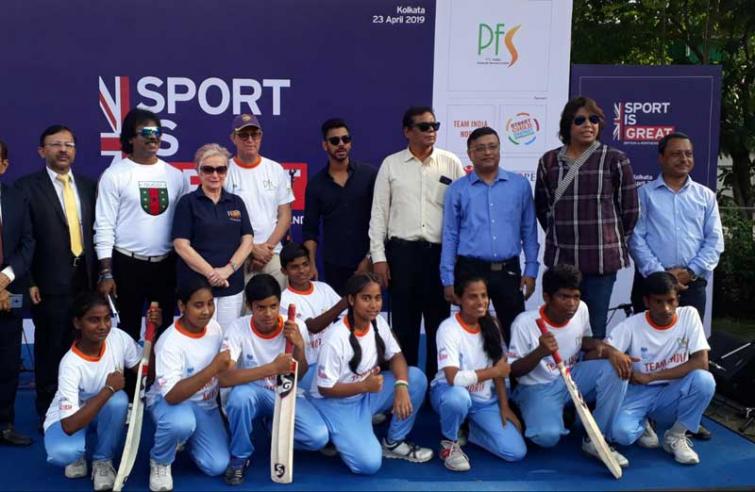 Kolkata: To celebrate and wish Team India of Street Child Cricket World Cup (SCCWC2019), as they embark on their quest for the inaugural tournament, British Deputy High Commission, The Hope Foundation and Save the Children has recently held a grand send-off ceremony in Kolkata.

Speaking on the occasion Bruce Bucknell, British Deputy High Commissioner, Kolkata, said, “I am delighted to be part of this friendly cricket match with Team India North players who are travelling to London for the Street Child Cricket World Cup. These children will be playing against different teams at The Lord’s Cricket Ground, London. Ahead of the ICC Cricket World Cup, this tournament would give them an equal opportunity to highlight their talent and skills. This is an excellent opportunity to the next generation of cricket players and hopefully someday these kids may play for Indian Cricket Team.”

Maureen Forrest, Founder Director, The Hope Foundation, added, “We are excited and all set to send off our India team to take on Lord’s. All these children come from very humble backgrounds and this is going to be a never before, enhancing experience. We wish them all good luck, not just for the match, but also, to voice their concerns on an international scale. These select children are representing many others who have to face the apathy of living in street conditions and seek an equal access to opportunities to build a brighter future.”

Dr. Pawan Singh, MD & CEO, PTC India Financial Services Ltd. said, “We are privileged to be a part of this unique journey of children from the streets to Lord’s.  This is an opportunity to represent the country at a global platform and we see this as an opportunity to create history and contribute to transforming lives of hundreds and thousands of children by supporting their aspirations and hopes.”

Chittapriyo Sadhu, State Program Manager, West Bengal and Assam for Save Children added, "Our team is all set to take on the world stage, both at the tournament and to represent the voices, dreams and aspirations of the 2 million children living on Indian streets. This will be a life-changing experience for the children and an inspiration for many others who would like their world to change for better. We wish them good luck on their mission to make #TheInvisibles visible.”

The one-of-its-kind international tournament, is being organised by Street Child United (SCU), a UK-based organization, which has a legacy of holding street child tournaments around major sporting festivals like FIFA World Cup in South Africa, Olympics in Brazil, FIFA World Cup Russia and more. The SCCWC is an opportunity to unite street connected children from nine countries, to play at the prestigious Lord’s Cricket Ground, whilealso put a spotlight on challenges they face.Off the pitch, the young people will make their voices heard and make recommendations to help improve the lives of street children worldwide.

India is set to send two teams, with India North being put together by Save the Children and The HOPE Foundation. PTC India Financial Services Ltdis supporting the children’s participation along with creating national and international visibility of Children in Street Situation.