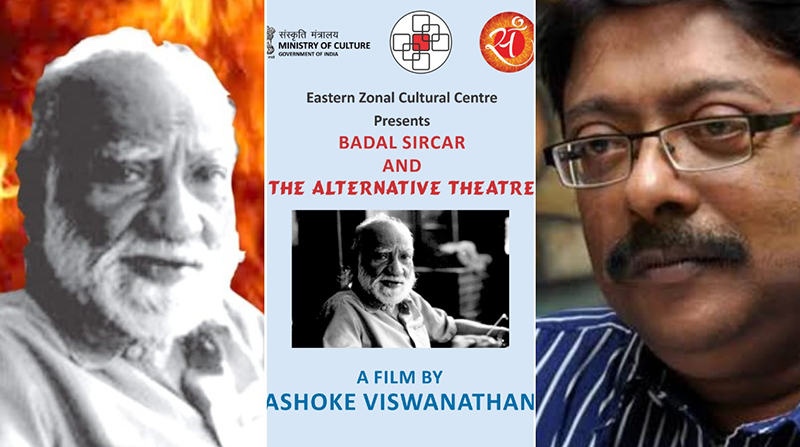 Nandan 3 auditorium was packed on an evening of documentary films chosen for screening at the 27th KIFF. Among the three films, one, Badal Sarkar and Third Theatre, drew a big audience.

Sudhindra Sarkar, born in 1925, famously known as Badal Sarkar, passed away silently on May 13, 2011, when the state of West Bengal was celebrating the change of power. So, Badal Sarkar’s exit warranted little more than the little red ribbon that runs at the bottom of our television screens.

As a young man in the 1940s, Sarkar was restless, moving from a private construction company to lectureships, and dabbling in Left politics. He moved to Europe where he was exposed to myriad theatrical forms and styles. Sarkar began writing plays from his thirties. He decided to take theatre seriously when he returned to India.

Among the several films made on him and on his unique contribution to theatre, veteran filmmaker Ashoke Viswanathan, who has done extensive research on the history of theatre for a television series, presents his view in the documentary about the playwright, director, author who shook the world of theatre first in West Bengal, then in India and later across the world.

According to Viswanathan, "This film attempts to blur the dividing line between documentary and fiction with realistic depiction merging into subtle dramatization. Since Badal Sircar's Third Theatre completely violates all the canons of so-called Proscenium theatre, breaking down the equations between character and actor, my film form is similarly abstract and elliptic.

"Juxtaposing significant excerpts and opinions with fragmented slices of theatre activity, the film is a clarion call to be sensitive to the poison fermented from contemporary decadence. This is at once a narrative and an autocritique as it fuels the polemical response to the art of Badal Sircar. Controversial and critical comments find a place beside genuine appreciation that never degenerates into simplistic eulogy."

Viswanathan fills his film with comments from theatre personalities like Rudraprasad Sengupta, theatre scholar Samik Bandopadhyay, Anjum Katyal who has written an entire book on Sarkar, apart from theatre scholars and theatre personalities who have either done research on Sarkar and his work, or worked with him or was a contemporary. They offer their personal takes on what they feel about Sarkar's innovative

Third Theatre made him an international name. Some of them feel it was a kind of 'craze' of the period while others felicitate him for his great contribution.

Badal Sarkar evolved and defined his individual content, form, aesthetics and philosophy. He called this Third Theatre which recognizes, establishes and reinforces maximum intimacy between actors and spectators. His strategy and methodology appeared simple and uncomplicated. But peeping behind the apparent simplicity was a philosophy that made theatre a performance for the people, of the people and by the people.

He began performing in small halls with benches and stools to create varied shades of relationship between actors and spectators. He moved to open streets, gardens, parks, everywhere, turning the whole world into a stage. He drew theatre out of folk and urban styles and to expose us to an unconventional theatrical dimension of free theatre, courtyard productions and village theatre. Chakra, Sarkar’s Cultural Club in Kolkata, intermittently pieced together theatre productions.

The most important contribution in the film are the inputs offered by Dr. Bisakha Roy,  an activist, poet and Sircar's former partner who says she was an active Naxalite at one time and proved to become the backbone of the personality towards the final years of his life. Few knew about Dr. Roy who proved to be a great inspiration for Sarkar to keep on moving forward in the direction of Third Theatre.

The film is produced by Eastern Zonal Cultural Centre. Viswanathan is a known name not only as a filmmaker with national awards but also as a noted academician who is currently Professor and Dean at Satyajit Ray Film & Television Institute,  Kolkata.

This film will certainly find a way to the film archives of theatre in India.

(Reporting by Shoma A Chatterji)