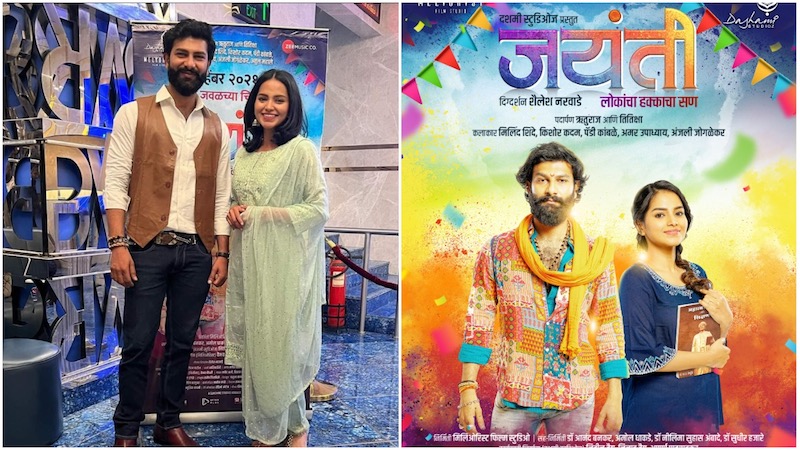 Marathi movie Jayanti addresses the issue of casteism, set for screening in Toronto

Marathi movie Jayanti, directed by Shailesh Narwade, produced by Meliorist Film Studio and starring Ruturaj Wankhede, Titeeksha Tawde and Milind Shinde, has been making records in Maharashtra, despite a strong competition from the Bollywood, and pandemic-induced constraints.  Ahead of its screening in Toronto, IBNS Canada writer Debarati Mukherjee reports

The unconventional theme of Marathi movie Jayanti celebrates the  path-breaking solutions to unite the youth against idolatry and casteism.

According to director Shailesh Narwade, his inspiration and idea behind the film came a few years ago during the 125th birth anniversary celebrations of Dr. Babasaheb Ambedkar, the architect of India's Constitution.

“In April 2016 I saw many big and small social movements and organizations in India and abroad preparing for and organizing the 125th birth anniversary of Dr. Babasaheb Ambedkar," says Narwade.

"Jayanti was celebrated in almost every nook and corner of the country including on social media with great zeal. However, the way in which some of the celebrations were organized, especially those witnessed by me, triggered a few questions in my mind.”

He adds, “I started wondering what will happen to those youth who are spending so much of their time and energy for such celebrations? How do such celebrations align with the purpose of their lives? Do they even have any purpose in life? How can Jayanti become a catalyst and therefore lead to a true occasion for celebration of not only the icons but also the transformation of these youth? "The more I thought about it, the more I realized the complexity of the subject and eventually realized that perhaps a full-length feature film script could be a good way to explore answers to these questions.”

But directing an unconventional film has its own challenges.

Narwade says, “The main challenge the project faced was/is on the financial front. The unsaid ideological reservations over the central idea of the film and entry barriers to the Bahujan filmmakers in a highly-closed film industry made it difficult for us to raise the funds through traditional film financers.”

The core team had to look out for alternate funding opportunities to turn the idea into a reality. Crowdfunding was a sought after option to start the project and with the support the team received it could finish the pre-production, shootings and songs.

“The movie centers around the journey of a misled young man Santya who is an aggressive goon. He is a matter of concern and fear for his family and society. However, a murder in the neighborhood poses a serious challenge of identity before him,” explains Narwade.

“This story narrates how this goon becomes a learned and socially responsible person to bring change in himself and the society. It reflects the radical transformation of the passive subjectivity attached to Dalit-Bahujan characters,” adds Narwade.

The movie was slated for an initial release in April 2020 with the support of the Ambedkarites (group of Baba Sahed Ambedkar supporters) on the auspicious birth anniversary celebrations of Jyotiba Phule and Dr Babasaheb Ambedkar.

However Covid lockdown and several other reasons delayed it. Released in theatres on November 12, 2021 in Maharashtra, India, Jayanti is all geared now to hit the international Maarathi diaspora.

The movie is scheduled to premiere in Australian cities like Melbourne, Sydney, and Perth, parts of the United States like Michigan, Washington, New Jersey, Cambridge, cities in the United Kingdom like Leicester, London, Toronto in Canada and Dubai. There are few more international cities where the demand of enthusiastic fans is approaching the makers to host the movie.

Vaishali Duphare, and Rajashree Shinde, the two women gang behind the Toronto screening of Jayanti, says, “We are very honoured with the response that the Indians residing in Toronto have shown towards the film. It was all word of mouth that spread far and wide in GTA, and we have a lot of people requesting for multiple screenings too.”

Vaishali adds, “Owing to the new COVID restrictions and social distancing rules, seats are limited. So we are getting several calls and inquiries for more shows and screenings.”

“It is our first time organising a private movie screening here in Toronto. We are excited and proud to see how the Marathi community, especially the Ambedkarite family, stepped forward to support the cause without any hesitation or biases,” says Vaishali. “The movie has a strong connection to the Ambedkarite Bahujan values as well as the teachings of Shivaji Maharaj to bring out an alternative social and political vision,” adds Vaishali.

The movie will presently have a single screening as scheduled on December 5th in the city’s Beach neighbourhood, Fox Theatre, at 9:30 AM for a selected audience. “Based on audience demand, we look forward to a regular release of the movie in Toronto,” adds Rajashree.

Marathis (as people of Maharashtra, India are fondly known as) residing in Toronto are excited about watching Jayanti  here, not just because it's an unconventional off-beat bollywood movie but because it lends a good note of brotherhood and fellow feeling at the end.

“I was taken aback by the amazing trailer and now looking forward to watching the movie, despite the pandemic still around us,” adds Shubhalaxmi Chandrikapure, a Marathi lady who works with a bank here in Toronto.

For Anagha Wankhede, a young business woman with roots from Nagpur, Maharashtra, “Its the social story linked with the psychological development which brings out the message that transformation is possible with right motivation, interested me. Am really looking forward to seeing how Santya transforms himself for the greater good.”