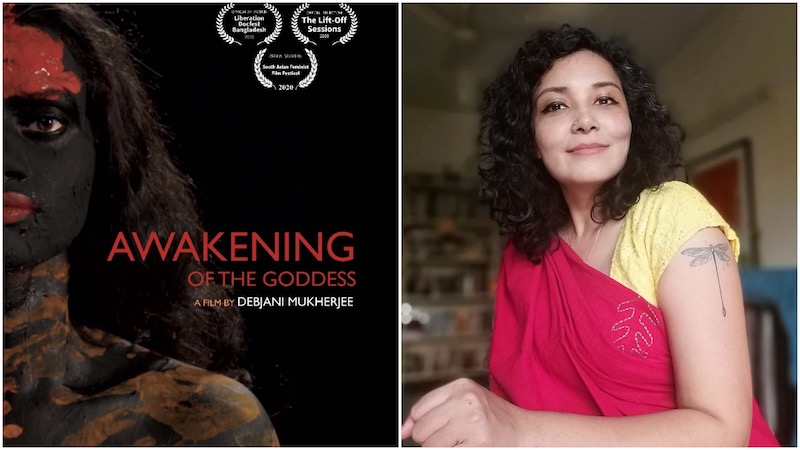 Awakening of the Goddess: A short, seamless message against gender violence

Animation has taken a whole new dimension since first catering to children as ‘cartoons’. Now it’s even embracing social messages.  Awakening of the Goddess by Debjani Mukherjee is one such, finds Shoma A Chatterji

Animation as we understand it began as cartoon and comic strips mainly aimed at children. Until recently, it was not used as a social agency to point out a social problem or make socio-political statements. Japan is credited for raising  the status of this genre of  film, calling it ‘anime’ with higher levels in cinematic form and content.

Awakening of the Goddess is a less-than-three-minute animation film by Debjani Mukherjee which is now doing the rounds of film festivals across countries. It has already been screened at the Liberation DocFest Bangladesh 2020, The Lift-Off Sessions 2020,  and South Asian Feminist Film Festival 2020.

Mukherjee introduces herself as an animation filmmaker, researcher, author and illustrator. After completing her graduation in Economics she joined National Institute of Design for a post-graduation course on Animation. “As life would have it, five years after graduating from NID, I joined IIT Bombay to do my research in Indigenous Art Pedagogy .”

Mukherjee is also the co-founder of ‘BolChild&#39’, a not-for-profit organisation with a vision of engaging community youth with arts.

“We contribute towards community filmmaking, especially animated documentary films and picture books thus encouraging them to share their stories   through the powerful medium of art,” she says. 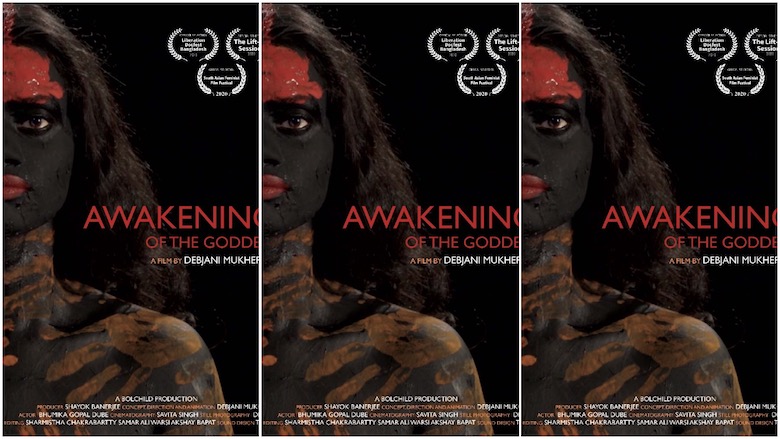 Awakening of the Goddess explores gender-based violence. Though only three minutes long, it is able to make a strong statement on the subject by addressing nine kinds of gender-based violence:  abuse at the workplace, emotional violence, sexual abuse, rape, trafficking, abuse of sex workers, domestic violence, spiritual violence and state-triggered violence of rape as a war weapon. Naturally, they often overlap.

To put across the message, an unclothed upper torso of a young woman and face is accompanied by a female voice-over. Graphic data at the beginning and the end of the film enhances the point. The voice-over talks about how a woman feels when she encounters unwelcome touch,  groping or how she gets to internalise some of the adverse comments on her body she has to face as a woman.

The woman’s torso has words painted on it in black while her face takes on different colours and shapes till it merges into the face of Goddess Kali.

“If you notice, there are no cuts in the film and one violence gives way to the other seamlessly.  In fact, I kept it as a text at the beginning of the film for the convenience of  NGOs so that they are able to use it according to the message they want to convey.

"But can you differentiate between emotional violence and sexual violence? You ask. The divide is ambiguous. My original film does not have the intro,” Mukherjee elaborates.

When asked how she conceived the film, she says, “Before making this film, I worked as a mentor to students in Yangon working with the women of the IDP camps of Myanmar to make a series of animated documentaries. The content was deeply disturbing. When I came back to India, I wanted to get it out of my system by raising a voice against similar issues in the Indian context.”

Mukherjee requested people (both known and unknown) to record their voices/experiences of violence and send her those recordings . She received many anonymous recordings. Some brave hearts chose to identify themselves in the film. “With these audio recordings I started to conceive  the design of the film. “

But using the partially nude body of a woman to describe and narrate the film is also voyeuristic, isn’t it?
Mukherjee argues, “The camera uses a kind of voyeurism but with a different purpose. On the other hand, the voice against women often comes with silence  and shame. The society expects us to do so in the name of being sober, patient and tolerant. The biggest challenge of the social workers is to get the woman to speak of the violence and show their scars to the world, which would be enough to unveil and shame the guilty. So, isn’t it true that the veil helps to protect the guilty? "

The film also asks another question - is a woman seen either as an object of pleasure or an object to vent one’s suppressed anger and emotions, like a goddess? Can’t she be and remain ‘a human’ with due respect and love?

The United Nations Woman Report, 2019, estimates that 35 per cent of women worldwide have experienced either physical and/or sexual violence by a non-partner (not including sexual harassment) at some point in their lives. In some countries, the number goes up to 70 per cent.

“Most of my films are experiments with the form and narrative medium of animation or films on social issues. I love doing sand animation, paint on glass and different forms of stop- motion animation,” Mukherjee says.