Mumbai, Apr 28 (IBNS) Turned 103 years old, the iconic Opera House of Mumbai witnessed a full-house starry attendance with the team of 102 Not Out.

Director Umesh Shukla along with the legendary duo Amitabh Bachchan and Rishi Kapoor and Jimit Trivedi gathered at the grandiose to join the celebration.

From sharing trivia about the film to bringing together the two actors, Umesh Shukla had great insights to share. The two legendary actors, who are sharing the screen after a span of 27 years gave out interesting anecdotes about their yesteryear movies and how they recreated all of it on the sets of 102 Not Out!

It is a known fact that both actors agreed to do the film in just 10 minutes of narration. Amitabh Bachchan was curious about his character, Dattacharya since he is 102 years old! Answering to his curiosity, Umesh said, “Zindagi toh zinda dili se jeeni chahiye, age is just a number!” 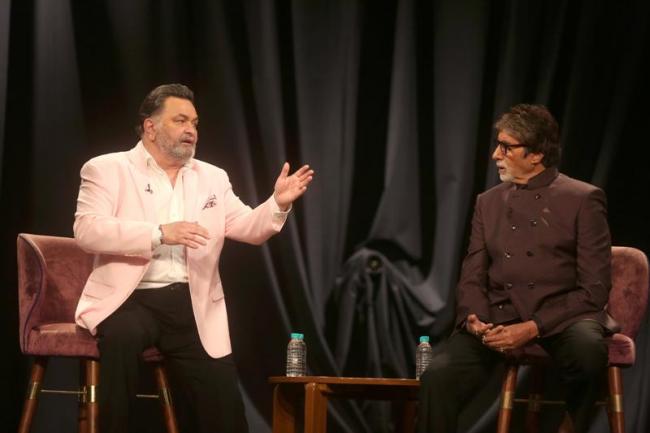 Sharing his views on cinema going digital, Mr Bachchan said, “Initially in the older times the movie was used to shot on a film reel and hence it was called the film industry. Today everything has turned digital and I wonder why do we still address it as film industry.”

Rishi Kapoor spoke about his initial journey as a child artist from the film Shree 420. Elaborating on his experience of facing the camera, the actor said, “I had to give a shot and it was raining that day. It was difficult for crew to prepare for the shot. The director came up with the idea to offer me chocolates to get the shot completed.”

102 Not Out does not feature any leading lady in the film and yet it has piqued everybody’s interest owing to its unique storyline. Commenting on the same, Mr Bachchan said, “Kahani apne aap mein hi bahot sundar hain! I don’t think that it will have any reflection on the Box Office. We also have Jimit who is an exceptional actor in Gujarati cinema.”

The movie initially did not have any peppy number when Amitabh Bachchan came up with the idea of the song Badumbaaa. He took complete charge from composing to actually singing the track! We all know how beautiful the song has turned out to be!

Writer Saumya Joshi and director Umesh Shukla have worked on several plays together in the past and the duo believes that bringing 102 Not Out to the silver screen has been one of the best ideas ever!

102 Not Out', A Sony Pictures Releasing International Presentation and worldwide distribution, is produced by SPE Films India, Treetop Entertainment and Benchmark Pictures. The film releases on May 4