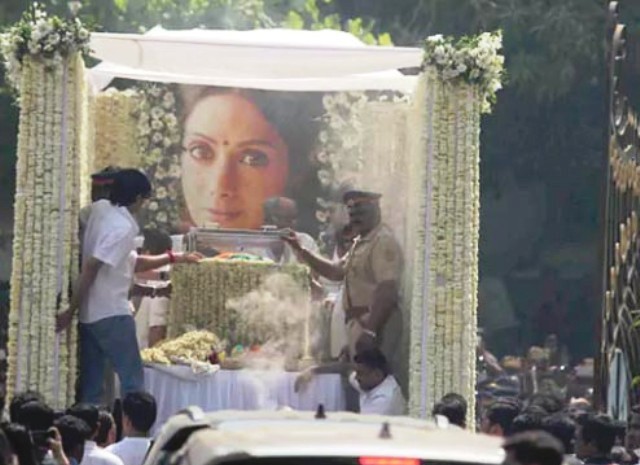 Mumbai, Feb 28 (IBNS): Ending an illustrious celluloid journey, Bollywood superstar Sridevi was cremated in Mumbai with state honours on Wednesday as actors, fans and common people formed a sea of humanity to bid final adieu to the woman who had entertained and inspired generations of Indians weaving her magic in the sliver screen.

The mortal remains of Sridevi, who died due to "accidental drowning" in a hotel bathtub in Dubai on Saturday night, were brought  to Mumbai from  on Tuesday.

Sridevi, who left a strong impression in the minds of Indian cinegoers with her films like Mr India, Sadma, Chandni, English Vinglish and Mom, had gone to Dubai to attend a wedding ceremony where her end came leaving her admirers in India shocked and heart broken.

Celebrities and common people joined to pay homage to the big screen icon on her last ride to Pawan Hans crematorium in Vile Parle. 54-year-old Sridevi's body was wrapped with the tri-ocolour and kept in a glass casket so that everyone could see her for the last time.

Many were seen weeping at the demise of their favourite movie star while many just chose to walk alongside the vehicle in which her body was being carried for last rites.

Her family earlier had issued a statement inviting the common people to join her last journey.

"We request you to kindly join us in paying our last respect to a remarkable actor, beloved wife and loving mother," the statement said.

"On behalf of Khushi, Janhvi, Boney Kapoor, the entire Kapoor and Ayyappan families, a sincere thanks to the media for your continued sensitivity and support during this emotional moment," it said.

Her body was kept at the Celebration Sports Club in Mumbai till afternoon. Thousands of her fans and celebrities reached the venue to pay homage to the actress.