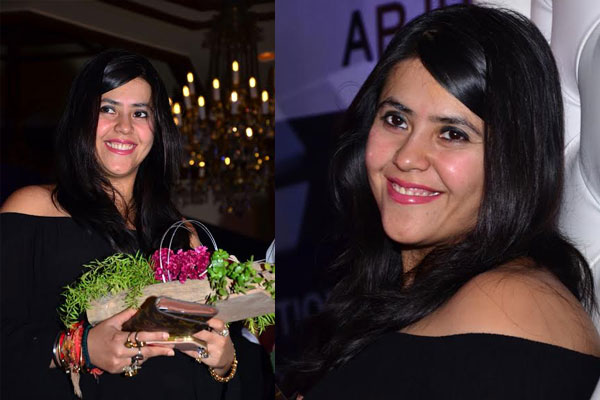 “Yes, we are producing Veera Di Wedding,” Ekta told media on the sidelines of a FICCI Ladies Organisation (FLO) talk show called ‘The World of Entertainment – A Serious Business’ at Taj Bengal on Thursday last.


Kareena Kapoor Khan shares screen space with Sonam Kapoor, Swara Bhaskar and Shikha Talsania in Veera Di Wedding, a story about four girls, which had been plagued by reports of production problem due to budget overshoot.


About her TV soap productions, Ekta named period-themed Chandrakanta (based on Chandragupta Maurya’s life) and another serial on immigrants living in Austria.


She then said as an afterthought, “Well film is like eating out and tv is like ghar ka khana. You now decide which one can be closer.”


About Laksshya Kapoor, brother Tusshar Kapoor’s baby boy born through in vitro fertilization (IVF), Ekta gushed, “With the arrival of Lakko, my whole life has changed.”


“He is the cutest thing ever happened to us. It is such a joy to have a nephew. You know I had to pull myselt to come here,” she said.


“About her future projects in Bengal, Ekta said Bengali producers, Chhayabani and she were doing a production here.


“But I would love to come in a bigger way. In fact, two shows are coming here,” she said.