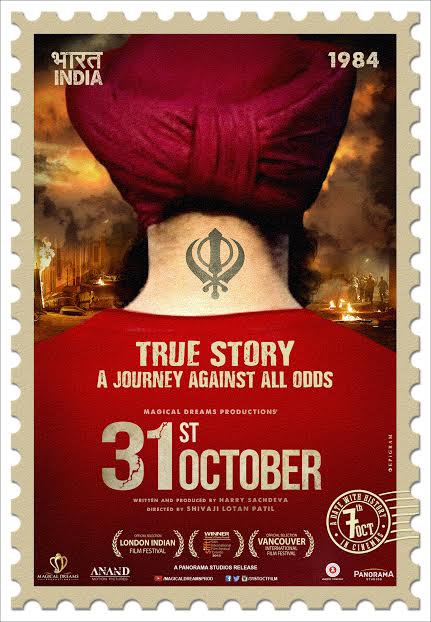 Directed by National award winning filmmaker Shivaji Lotan Patil, the film is based on the true story of a Sikh family and their struggle for survival against all odds during the anti-Sikh riots in Delhi following the assassination of the then Prime Minister Indira Gandhi, who was shot by her Sikh bodyguards.

The film, an edge-of-the-seat thriller, was praised for being gritty and heart-rending at various foreign film festivals and needless to say, the film will prove to be a treat for history buffs as well as fans of the thriller genre.

Writer-producer Harry Sachdeva and co-producer Anand Prakash said, “We are proud to bring this subject on the big screen and we are glad that after crossing all hurdles, our film 31st October will be released worldwide on 7th October, 2016.”

On his part, director Shivaji Lotan Patil said, “It was a great opportunity for me to direct this subject. It’s the first film ever on the aftermath of Indira Gandhi’s assassination and it’s a film for the world audience.”

Kumar Mangat, Chairman of Panorama Studios added, “Panorama Studios is proud to be associated with 31st October. The film has a global appeal and is a must watch human interest story, especially for the youth. I appreciate the efforts of the filmmaker to attempt such a bold and a brilliant subject and bring it to the big screen.”