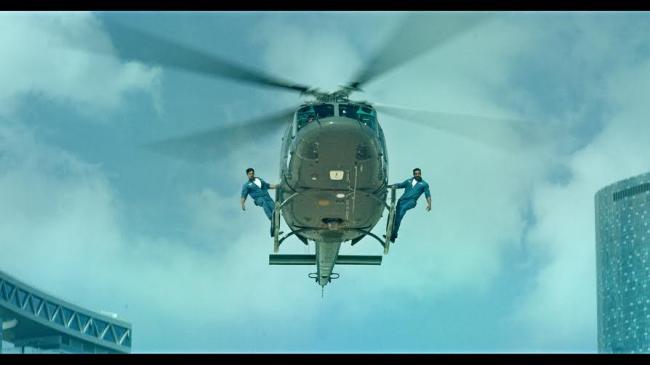 Dishoom team to do a live stunt

Sajid Nadiadwala's Dishoom, an action adventure has been giving the audience the thrills and the Dishoom boys are all set to take the thrill a notch higher.

While in the Capital city for promotion, the Dishoom lads are gearing up to treat their audience with a first hand experience of the daredevil scene.

The scene, which is touted to be Bollywood's most expensive chase sequence features the buddy cops in a helicopter.

Both John and Varun are to recreate Dishoom's helicopter chase sequence and give a first ever kind of a Live visual to the audience.

The actors are to travel from the airport to Noida in Delhi via air, a la Dishoom.

During the team's visit to Delhi, John and Varun are to board a helicopter and make a heroic entry at a Cricket Ground in Noida.

With the actors performing such a daring stunt live, Sajid Nadiadwala is looking into the actors safety and is taking all the precautions.

The Dishoom trio consisting of John, Varun and Jacqueline are seen treating their fans with each interaction and their Delhi visit to further take this trend forward.

Sajid Nadiadwala's Dishoom that releases on 29th July, revolves around two buddy cops Kabir and Junaid played by John and Varun and will bring to celluloid a bromance between the two action heroes. The film also has Jacqueline Fernandez as the female lead, donning a sexy avatar.

The film also marks to be a comeback for Akshay Khanna as a villain on celluloid.

Sajid Nadiadwala's Dishoom trailer proved to be a perfect mix of action and humor in addition to the glam quotient brought to the table by its star cast.

The trailer of the film released to an overwhelming response with the songs turning into instant chart-busters.

All these ingredients sure combine to make yet another entertainer by the Nadiadwala Grandson Entertainment banner.