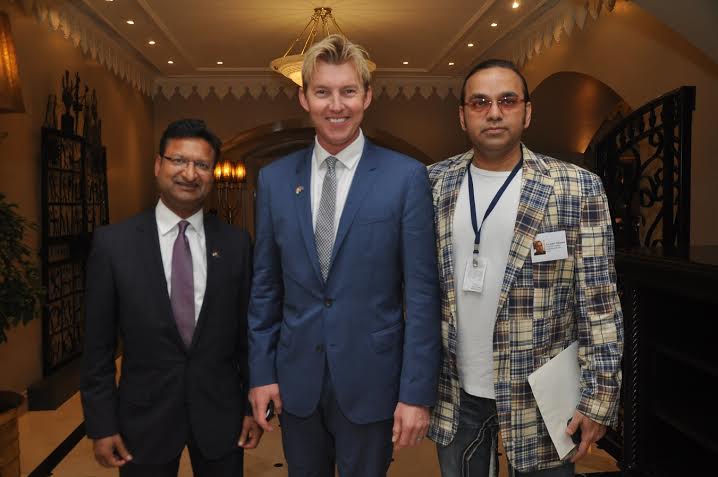 The first of its kind in the world, the Australia India Film Fund was established in 2013 to invest in Australian films with Indian themes for a global audience.

When a beautiful divorcee and single mother of one, Meera  (Tannishtha Chatterjee), meets the charismatic Will (Brett Lee), love is the last thing on her mind.

An Australian of Indian origin, Meera has settled in Sydney and carved out a successful career and life for both her and her daughter.  But Meera's marital status is subject of much discussion within her family, and she is encouraged on a seemingly daily basis to marry 'a nice Indian man’. Does she do as her family wishes? … Or does she follow her heart and live her life the way she wants to?

Highlighting the complexities of Indian diaspora and wooing another from a different culture, UNINDIAN is a romantic comedy with a lot of heart!

Tannishtha Chatterjee said: “Australia has always been a very special country for me.  It makes me very happy to play the lead in the Australian Indian Film Fund film UNINDIAN. I love the script and I am super excited to work with Anupam Sharma and his entire team. And Brett Lee ... What can I say? Look forward to having a blast, Brett!”

CEO of the Australia India Film Fund Devendra Gupta said: “AIFF was formed with the vision of creating high quality cross cultural productions. Over the next few years we intend to inject significant funds into the Australian film and television industry, with specific focus on cross-cultural stories.  My associate Mr. Yateender Gupta and I are honoured that the first slate of AIFF films is receiving such strong support.

“As Indian Australians we see it as our responsibility to both celebrate the values of and strengthen ties between the two countries. With the creative magic of our Head of Films Mr Anupam Sharma, and a pool of investors ready to support these projects, we are confident of AIFF’s continued success for years to come.”

With the second film in the slate, currently in advance stages of development it is anticipated that the AIFF will invest in excess of ten million dollars in to the Australian film industry over the next two years. Written by Vikram Singh, An Indian Summer will be produced by John Winter (Rabbit Proof Fence, My Mother Frank, Paperback Hero) and directed by Vikram Singh and is expected to go into production in mid 2015.