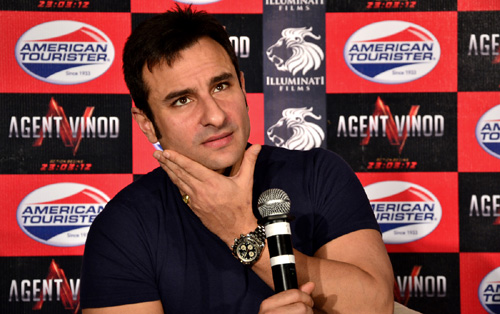 If media reports are to be believed then his wife Kareena Kapoor will be celebrating her hubby's birthday with him in London this time.

Saif, who hails from a royal family, is the son of cricketer and last titular Nawab of Pataudi, late Mansoor Ali Khan Pataudi and actress Sharmila Tagore, a great-grandniece of poet Rabindranath Tagore.

Saif made his Bollywood debut in 1992 with the film ‘Parampara’, where he shared the screen with Aamir Khan, Raveena Tandon and Neelam Kothari. The film was declared a flop at the box office.

In between 1992 and 2001, the actor featured in films like ‘Main Khiladi Tu Anari’, ‘Yeh Dillagi’, ‘Bambai Ka Babu’, ’ Kachche Dhaage’, ‘Aarzoo’, ‘Kya Kehna’ and others, but was never praised for his performance and was often criticized, sometime for his striking similarity in appearance with his mother Sharmila Tagore.

After struggling for nine years in the industry, the actor rose to stardom with 2001 film ‘Dil Chahta Hai’, which marked a turning point in his career.

The actor won the National Film Award in 2004 for his role in the film ‘Hum Tum’ and six years after winning the honour, Saif added anther feather in his crown, as he was conferred with the Padma Shri award in 2010.

Throughout his stardom, the actor got involved into various controversies. In 1998, Khan was charged with poaching two blackbucks in Kankani during the filming of ‘Hum Saath Saath Hain’.

Again, in 2008 Khan was involved in assaulting a photographer while filming ‘Love Aaj Kal’.

Saif married actress Amrita Singh in October 1991 and they have two children, Ibrahim and Sara. After thirteen years of marriage, the couple divorced in 2004.

The actor then dated a Swiss model but finally married Kareena.

From comedy to romance, Saif's films have kept impressing his fans over the years but his recently released comedy 'Humshakals' failed to create any impression at all.