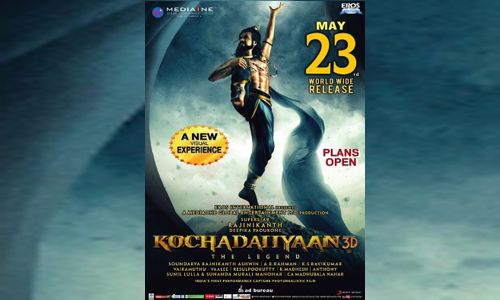 Eros International released the film in 2D and 3D on May 23, in 6 languages over 3,000 screens worldwide.

According to the makers, directed by Soundarya Rajnikanth Ashwin, the photorealistic performance capture technology film has set a new milestone in the history of Indian cinema and set the box office ringing with a bumper opening weekend and grossed Rs. 30 crore in India and Rs. 12 crore overseas.

With pre-sales from satellite rights in multiple languages, audio and music rights exploitation, brand tie ups and other income, the film is well on its way to cross Rs 100 in revenue just after the opening weekend, the Company officials said.

Commenting on the successful opening of the film, Nandu Ahuja, Senior V P, India Theatrical, Eros International Media Ltd said, “Thalaivar fans have given huge thumbs up to the film, which showcases the charisma of their favorite superstar in a never seen before avatar.”

Ahuja said, “Advance booking for the opening weekend, especially in Tamil Nadu were outstanding and true to Rajni films, the shows opened as early as 5.00 a.m. to capacity audiences with the build-up commencing the night before. As the film continues to attract huge numbers with its high octane action, photo realistic animation and of course Rajinikanth’s larger than life persona, we expect the film to continue wowing audiences.”

Commenting on the film’s performance overseas, Pranab Kapadia, President, Marketing and Distribution, Eros International Plc said, “Fans of the superstar across the world have appreciated the film and it has opened extremely well in the overseas markets.”

Jyoti Deshpande Group CEO & MD of Eros International Plc said “We are delighted with the superb response to the film which has been a labour of love over the last two years. We thank the critics and the audiences that have helped build such a wonderful momentum to the film and given recognition to Soundarya’s vision and talent.”

Deshpande added, “We are seeing an overwhelming demand for a prequel or a sequel. Watch this space. But for now enjoy Kochadaiiyaan in 2D or 3D with your entire family, in a big screen near you, in a language of your choice.”

‘Kochadaiiyaan’ is an epic dramatization of good versus evil starring South Indian megastar Rajinikanth in a double role in a larger than life depiction.

Providing the musical score to this magnum opus is Oscar-winning composer A R Rahman.