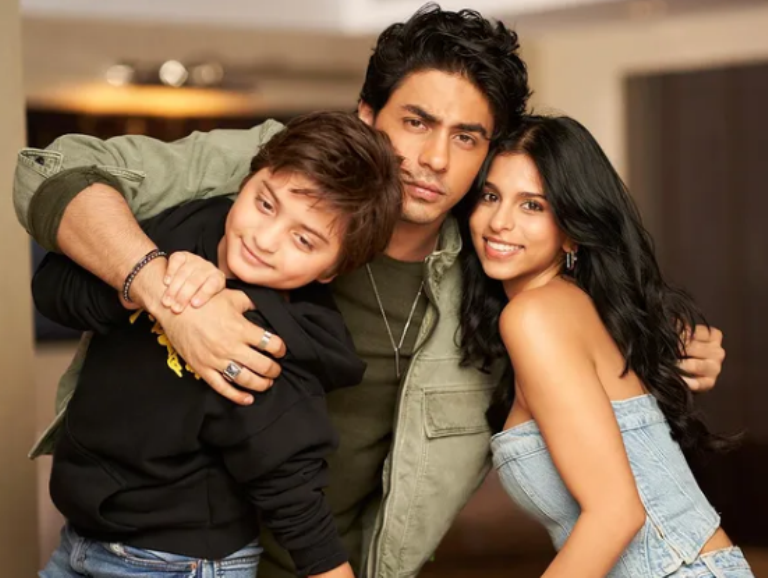 Aryan Khan is back on Instagram after a year-long hiatus, father SRK can't keep calm

Mumbai/IBNS: After a hiatus of a year actor Shah Rukh Khan's son Aryan Khan is back on Instagram as he shared a couple of pictures with his siblings AbRam and Suhana Khan. He captioned the pictures, "Hat-trick".

In the first pic, Aryan is dressed in an olive T-shirt and denim jacket. While Suhana Khan is all smiling in an off-shoulder denim co-ord, AbRam sported a black hoodie with denim jeans.

The second picture is a close-up of Aryan Khan and AbRam looking at the camera.

The pictures of the siblings drew reactions from netizens and fans soon after being shared.

Shah Rukh too reacted to the post, and wrote, "Why I don't have these pictures!!!!!! Give them to me NOW!"

Aryan, though, had a reply ready for SRK. "I'll send them to you the next time I post…so probably in a few years haha."

Suhana Khan, meanwhile, had a complaint as she seemed to have been cropped out of the second picture. "Thanks for the crop", she commented and then added another comment, "Love u."

The 22-year-old will make her acting debut in Zoya Akhtar's 'The Archies' next year.

This is Aryan's first post on the photo-sharing platform since he was arrested in the drugs-on-cruise case.

Aryan Khan spent nearly a month in jail last year after his arrest following a Narcotics Control Bureau (NCB) raid on a cruise ship party on October 2. He was "Accused Number 1" in the case in which a total of 20 were arrested.

The anti-drugs agency found no drugs on him but claimed in court that his WhatsApp chats proved his involvement in "illicit drug deals" and links with a foreign drugs cartel.

Aryan was later cleared of all charges by the NCB due of a lack of sufficient evidence.