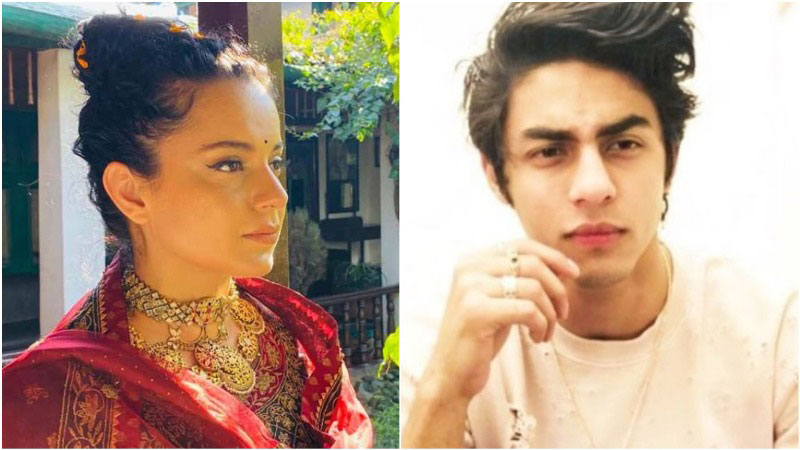 Mumbai/IBNS: After Hrithik Roshan and his ex-wife Sussane Khan extended support to Shah Rukh Khan's son Aryan, who has been arrested in a drugs case, Bollywood actor Kangana Ranaut has called out the 'Krrish' star and said we must not “glorify” one’s “mistakes.”

Kangana wrote in her Instagram story, “Now all Mafia Pappu coming to Aaryan Khan’s defence…. We make mistakes but we mustn’t glorify them … I trust this will give him perspective and also make him realise consequences of his actions…. Hopefully it can evolve him and make him better and bigger. It’s good not to gossip about someone when they vulnerable but it’s criminal to make them feel that they did no wrong.” 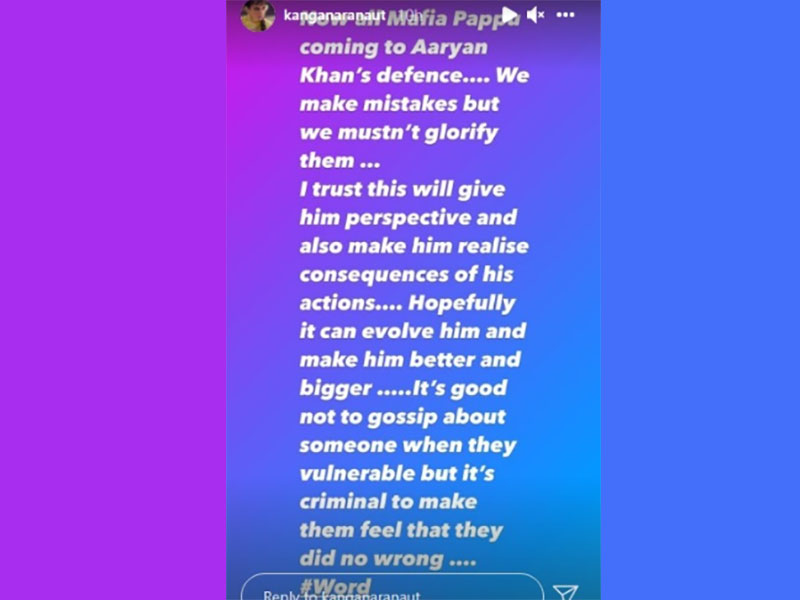 In a long post on Instagram, Hrithik earlier in the day tried to inspire 23-year-old Aryan who was taken into custody after police raided a rave party on a cruise last Saturday night.

Hrithik's post reads, "My dear Aryan . Life is a strange ride . It’s great because it’s uncertain. It’s great cause it throws you curve balls, but god is kind. He gives only the toughest ones the toughest balls to play. You know you are chosen when amidst the chaos you can feel the pressure to hold your own. And I know you must feel it now. The anger, the confusion, the helplessness. Aaah , the very ingredients that are needed to burn the hero out from inside you.

"But be wary , those same ingredients could burn away the good stuff... the kindness, the compassion, the love. Allow yourself to burn, but just enough.. Mistakes , failings , victories , success... they’r all the same if you know which parts to keep with you and which parts to throw away from the experience. But know that you can grow better with them all. I’v known you as a kid and i’v known you as a man. Own it. Own everything you experience. They’r your gifts. Trust me."

"In time when you connect the dots... I promise you , It’s gonna make sense. Only if you have stared the devil in his eyes and kept your calm. Keep calm . Observe. These moments are the makers of your Tom. And Tom is going to have a brilliant sun shining. But for it , you must go thru the dark. Calm , still , owning your own. And trusting the light. Within. It’s always there. Love you man," the actor adds.

Reacting to Aryan's arrest and the subsequent alleged "witch-hunt", Sussanne Tuesday said Shah Rukh's son was "at the wrong place at the wrong time".

In the comment section of a journalist's Instagram post, Sussanne, who is believed to be a close family friend of Shah Rukh and his wife Gauri Khan, wrote, "I think this is not about Aryan Khan, as he was unfortunately at the wrong place at the wrong time."

"This situation is being made an example to drive home the excitement that some people get as they have a witch hunt on people from Bollywood," she added.