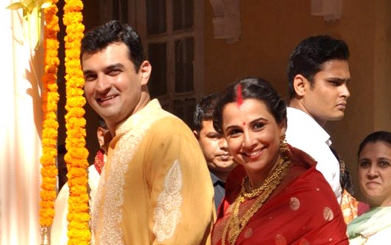 Vidya refutes reports of trouble with her husband

In an interview to Hindustan Times, Vidya Balan said, “We are happy with each other. There is no chink in the armour. Sorry to disappoint you."

Speaking about her pregnancy rumours and over opting out of Sujoy Ghosh’s film ‘Durga Rani’, she said it was a decision for her health.

"I think these rumours started because I opted out of Sujoy’s (Ghosh, director) film, and IIFA awards. I said that there’s a niggling health issue. But people said, ‘Maybe it’s not.’ Honestly, when a male actor — and I’m talking about superstars — has walked out of films one week before it started, and this has ­happened several times, why aren’t they judged? Why don’t people speculate about their personal lives? Why then, if I’m taking time off, there has to be a personal angle? I think it’s just extremely ­judgemental," she said.

"May be people can’t ­stomach the fact that an actress will actually take a break. It’s amusing, the kind of stories floating around. One week, I’m pregnant; the next week, there’s a problem; the week after, I’m ­unprofessional," she told the newspaper.