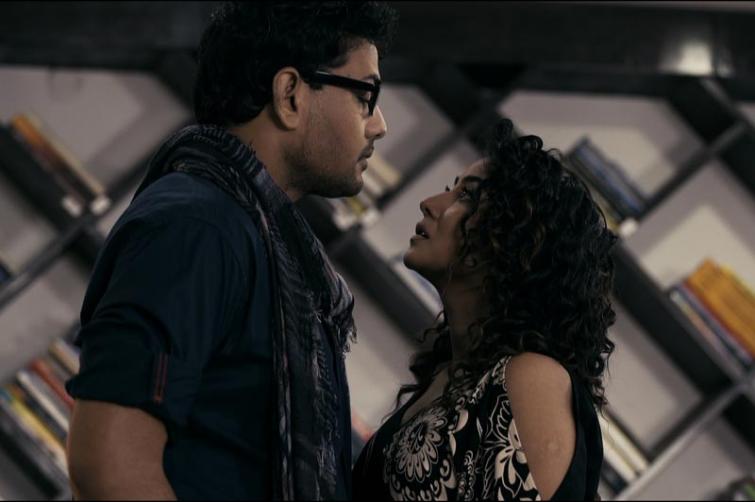 The first half an hour of the movie reminds one of the 2015 Hindi movie Alone, where Bipasha Basu plays twin sisters who fall for the same person.

But that was a horror genre film where one sister was a ghost.

Sin Sister takes a different turn and tries to confuse the viewers with several twists in the plot.

At one point in the second half, it becomes difficult to understand whether we are watching Pihu, the good sister, or Kuhu, the evil sister.

The plot is intelligently crafted and succeeds in taking turns that the viewers would not expect.

The film starts with a murder of a woman who has fallen to her death from an under construction high-rise.

Their investigation leads them to bestseller author Durjoy (played by Tathagata Mukherjee) who had employed two identical twin sisters to assist him in his home-office.

Durjoy’s love life with his girlfriend Tanushree (played by Tuhina Das) takes a turn for the worse, with the two sisters coming to his life.

The sibling rivalry spins out of control, and the plot takes unexpected turns and starts getting complicated and dark, wiping the differences between good and evil.

Rupankar Bagchi, the detective is the best surprise in this movie with his excellent attention-grabbing performance as the badass cop.

Debleena puts up a strong performance as the twin sisters.

We wish we saw more of Tuhina Das who is also a great performer.

Tathagata Mukherjee is apt as the author with his subtle performance.

The background score by Virtual Brothers is successful in building the atmosphere of chill and thrill.

Songs are not a good idea for thrillers because they slow down the pace and thankfully there aren’t many songs in the movie.

Cinematography by Roze Alam and Subhadeep Naskar is glossy and the editing crisp.

The story is adapted from Geri Hemer’s novel, and the screenplay by Pinaki Ghosh are the strongest assets that make the viewers glued to the screen for 90 minutes.

Subhabrata Chatterjee’s direction is successful in presenting a glossy, modern age Bengali mystery thriller, which does not lose its fast pace, nor gives away the secret.

The director’s creative use of VFX to show both the sisters (played by the same actress) in the same frame is worth appreciation.

Since Bengalis have this eternal liking for detectives in films, as seen in Byomkesh, Feluda, Shobor, I hope the makers find a way to bring back detective Agnibesh Chatterjee to solve more mysteries in the future.

Sin Sister, produced by Geri Hemer and Pinaki Ghosh under Power Publishers & Motion Pictures, released in February 2020 and is streaming on Hoichoi and Mxplayer.