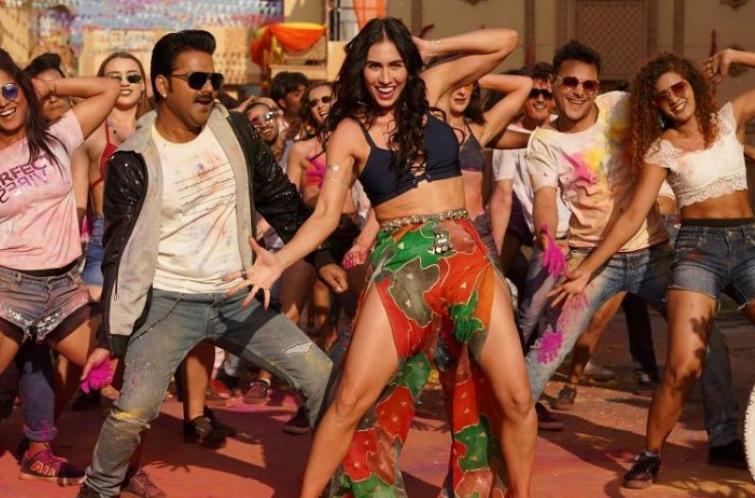 Biggest Bhojpuri star Pawan Singh has sung and acted in the song, which has become the Holi anthem of the year and features acclaimed dancer Lauren Gottlieb.

The song has been composed by Payal Dev and the music video has been directed by Mudassar Khan.

As part of the collaboration, Likeers are invited to perform on the song and share their colorful videos with #KamariyaHilaRahiHai, tagging superstar Pawan Singh, Lauren Gottlieb, and Jjust Music.

They can make their videos interesting by using video stickers and features such as ‘superme’ and ‘face magic’.

The videos liked by the artists will be shared on their Instagram accounts.

So far, 'Kamariya Hila Rahi Hai' has clocked millions of views. It has also been mentioned as the number one trending song on YouTube.

Singh shot to fame with immensely popular ‘Lollypop Laagelu’ song and is currently one of the biggest names in the Bhojpuri film industry.

His co-star Lauren Gottlieb, a dancer, first appeared on the Indian television screens with the sixth season of 'Jhalak Dikhhla Jaa'.

Following it, Lauren appeared in Bollywood film 'ABCD: Any Body Can Dance' and several music videos, with popular artists such as Badshah and Harrdy Sandhu.

Speaking about the association, Singh said, “Likee is a platform that has pan-India reach. The platform is particularly popular in the region where most of my fans reside. Every year I come up with a new song for my fans and this time we thought of leveraging the platform for the promotion of my latest song. I am sure that Likee will help the song reach a broader audience.”

Jjust Music spokesperson attributed the selection of Likee for the song promotion to the platform’s popularity in tier II and tier III cities, along with metros, saying, “Pawan Singh is one of the biggest regional stars and his stature is completely in sync with the increasing popularity of Likee in India. Likee’s nation-wide popularity made it our essential choice for the song’s promotion.”