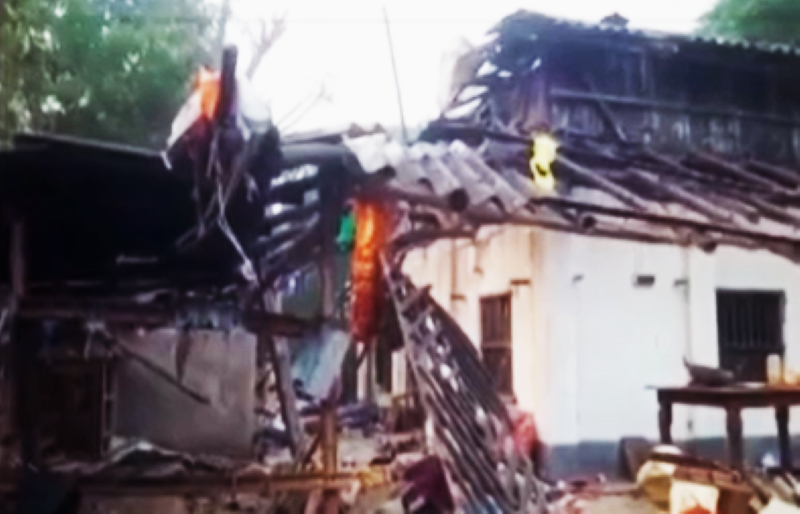 Contai/IBNS/UNI: At least three people, including a booth level Trinamool Congress (TMC) leader, were killed in a powerful explosion that destroyed the house of the politician in West Bengal's East Medinipur district last night, reports said on Saturday.

Among the killed, the half-burnt body of Rajkumar Manna was recovered nearly one and half kilometers away from the scene of the blast this morning.

Police investigating the crime said the blast may have killed Manna.

One more burnt body, identified as Biswajit Gayen, was found about 500 mts away from the first body.

Another Debkumar Manna sustained bomb wounds and was on critical condition.

The BJP leader demanded the NIA probe into the blast.

Police, bomb squad and a team of forensic experts arrived this morning to investigate the blast.

TMC coordinator of East Medinipur Tonmoy Ghosh said he heard that three people were wounded and added that the TMC was not involved in the blast case.

Slamming the BJP, West Bengal Minister and TMC leader Shashi Panja said, "So finally Suvendu Adhikari has conceded the fact that bombs are present today in Kanthi and they are going to be hurled."

"So Suvendu Adhikari is plotting to hurl these bombs at the Kanthi rally (of Abhishek Banerjee). You are scared!

Our National General Secretary Shri @abhishekaitc is to address a public meeting in Kanthi today and LoP @SuvenduWB inadvertently confesses their murderous motive.

Who was the target? pic.twitter.com/4m2jIcdj8h

TMC national general secretary Abhishek Banerjee is scheduled to address a public meeting at College Ground in Contai in East Midnapore today, about 40 kms from the scene of the blast.