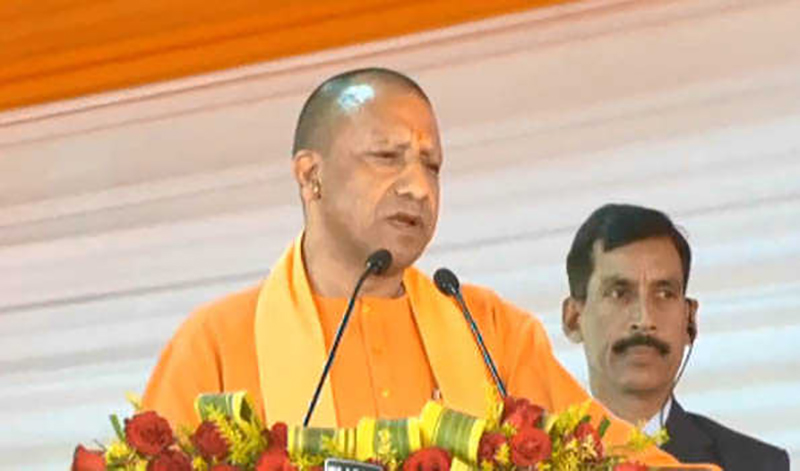 Launching 102 development projects worth Rs 328 crores in Jhansi, the Chief Minister said, "Natural resources were abundant in Bundelkhand, but it was previously looted there.

The Prime Minister wanted Bundelkhand to emerge out of this situation.

The Bundelkhand Expressway was constructed here, which the PM dedicated to the nation this year, and as a result, Bundelkhand is now seeing unprecedented growth. Now the distance from Bundelkhand to Delhi is covered in five hours."

Addressing the Prabuddha Jan Sammelan, he expressed gratitude towards the people for bringing back the BJP in power during the assembly elections.

"As per the vision of the PM, we implemented the Jal Jeevan Mission and now water is reaching every house. Very soon, each and every house in Bundelkhand will have pure drinking water, which itself will cure half of the diseases."

He said that having access to clean drinking water makes it simpler to achieve the objective of 'ease of living'.

Stating that two important units of the Defence Corridor are being built in Jhansi and Chitrakoot, the Chief Minister said, "Continuous development works are underway in Bundelkhand.

Yogi said that Bundelkhand is getting free from dacoity.

"The influence of mafias and criminals has come to an end here. These mafias used to illegally capture the property of the poor and businessmen earlier. Now the government has started the recovery along with interest.

"The process of building houses for the poor has been started on their property," he said.

He said, "Before 2017, even the police used to find themselves helpless. Today, the police in UP are ensuring that mafias are doomed."

The CM also released a coffee table book based on tourism development during the programme.

Recalling the contribution of Maharani Lakshmi Bai who sacrificed her life for the freedom of the country, he assured people that Bundelkhand would no longer be in poor condition.

"The work of development is continuously being carried out by the government.

The government is working to give the poor access to homes, water, toilets, cooking gas, and electrical connections, among other things," Yogi said.

He said that several locations have CCTV cameras installed. "The BJP government's responsibility is to create a feeling of security. The atmosphere of security is excellent right now; there are no riots, hooliganism, or chaos in the state," he said.

The Chief Minister said that the government's top priority is to implement the PM's schemes.

"The government is working to give every widow, every disabled a pension, every poor person a shelter and every unemployed person a job," he said.

Yogi said that during the Mann Ki Baat programme, the PM had lauded the Jhansi woman's daughter for cultivating strawberries under one roof.