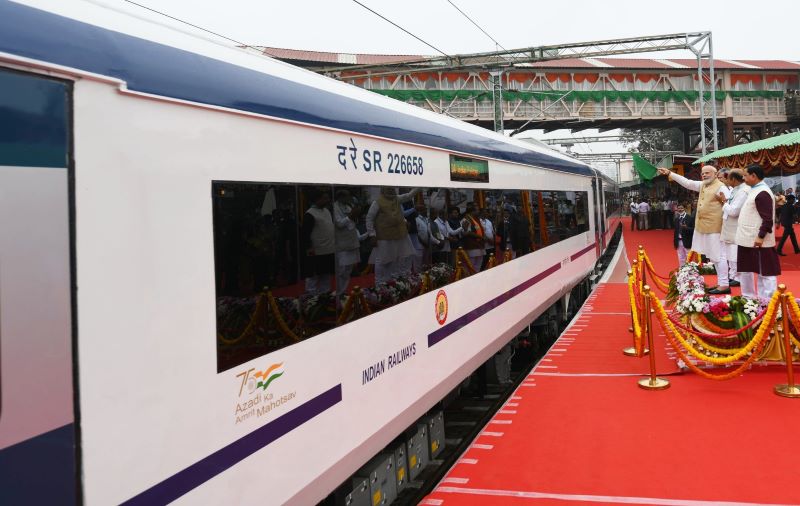 Bengaluru/UNI: Prime Minister Narendra Modi on Friday inaugurated infrastructure projects, having a lot of cultural and political implications, ahead of the 2023 Assembly elections in Karnataka.

After landing in the city at HAL Airport, his convoy visited Vidhana Soudha to pay floral tributes to saint Kanakadasa's statue on his Jayanti.

Political pundits have dubbed this act as an attempt to appease the Kuruba community.

Kanakadasa Jayanti is a very important celebration for the Kuruba community.

The saint was a philosopher and played a stellar role in spreading messages of equity and uplifting the oppressed section of the community.

The use of local language in Carnatic music and kirtans gained him a lot of fame.

After paying floral tributes to the statues, PM Modi reached the Krantiveer Sangolli Rayanna Railway Station by road and flagged off the Chennai-Mysore Vande Bharat Express.

This is the fifth Vande Bharat Express train in India and first such train in South India.

The objective of Vande Bharat train is to improve connectivity between Chennai which boasts of industrial clusters and Bengaluru, which is called Silicon Valley of India.

The train will also play a role in promoting tourism in Mysuru.

PM Shri @narendramodi gets a warm welcome on his arrival in Bengaluru, Karnataka. pic.twitter.com/2GAFMmUhHc

Karnataka is the first state to run such a train under the Bharat Gaurav scheme, which will ferry pilgrims from Karnataka to Kashi and back home. The pilgrims will be provided comfortable stay and guidance for visiting Kashi, Ayodhya and Prayagraj.

Keeping with his trademark practice, Prime Minister Narendra Modi on Friday walked down and greeted people who had come to get a glimpse of him.

The Prime Minister was accompanied by his security detail while he walked and waved to the people standing on both sides of the road outside Krantiveer Sangolli Rayanna Railway Station where he flagged off two trains.

In response, the people waved back at PM Modi with enthusiasm and raised slogans of "Narendra Modi Ki Jai."

The Prime Minister was dressed up in his inimical kurta-churidar and traditional sleeveless jacket.

Modi also inaugurated Terminal 2 of Kempegowda International Airport, built at a cost of around Rs 5,000 crore.

The terminal boasts of handling 5-6 crore passengers per annum, from the current capacity of about 2.5 crore from Terminal 1.

PM Modi unveiled the 108-feet bronze Kempegowda statue (Statue of Prosperity) at Kempegowda International Airport, which has been dubbed by political pundits as a ploy to woo Vokkaligas, a majority community in Mysuru region that is a bastion of either Congress or JDS.

However, the BJP is fast gaining control in the region with its vote share percentage increase of late in a series of elections and desertion of some prominent Congress leaders to BJP ahead of the state elections scheduled next year.

Union Minister Pralhad Joshi and other dignitaries also were present at the occasion.