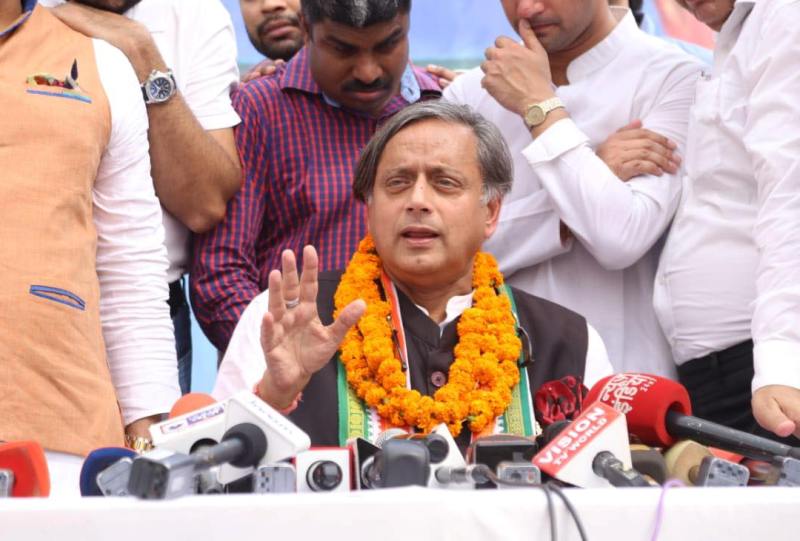 Hyderabad/UNI: Defending his nomination, AICC Presidential nominee and Congress leader Shashi Tharoor Monday said that there is a need to have a strong party to take on the Bharatiya Janata Party (BJP) at the centre.

The party has lost two elections continuously and this election shows how Congress should be strong in the coming general elections to challenge the BJP –led NDA government, Tharoor, who is in the city to campaign for the upcoming presidential polls of the party, said in a press conference here.

Tharoor, who is taking on party senior leader Mallikarjun Kharge in the elections, said that he will not withdraw from the elections.

Referring to the ‘G-23’ leaders in the Congress, who purportedly wrote letters to the party high command, Tharoor said that there is no such grouping in the party and said it was a ‘media idea”.

During the day in a tweet, he said that there is no ideological difference between veteran leader Mallikarjun Kharge and him and that the party is together when it comes to taking on the ruling BJP.

"Let me make clear that I agree with Mallikarjun Kharge ji that all of us in INC wish to take on the BJP rather than each other. There is no ideological difference between us. The choice for our voting colleagues Oct17 is only on how to do it most effectively," he tweeted.

Earlier in the morning in a press conference, Former Union Minister and Congress Working Committee (CWC) special invitee Chinta Mohan wanted Shashi Tharoor to withdraw from the contest for the president post of All India Congress Committee (AICC) as Mallikarjun Kharge, a Dalit, and party senior leader got an opportunity to get elected to the position after 50 years.

“Revolutionary changes are taking place in the Congress. General secretary Rahul Gandhi has been walking all across the nation to understand the problems of the people. Everyone in the party from Kashmir to Kanyakumari is supporting the candidature of Mr. Kharge. In another two weeks, he is going to become president of the party,” said Mohan.

Tharoor is a recent entrant to the Congress party and anti-Dalit. Except for one vote, a total of 9,000 votes will go to Kharge, the former minister said.

He also stressed the need for Congress and Communists to join hands, stating that then only the United Progressive Alliance (UPA) would come to power.